For as rough and abrasive as Unsane appears in front of you it feels like such a breath of fresh air. I mean, I came out of it shook. It’s grimy and exploitative, knockout trash which feels like they’ve been mandated to throw in a new twist every ten or so pages. Y’all never got to wait long before it decides to throw something lurid up on the screen, but it’s carried off like a real miser is holding onto the purse strings.

A more expensive film might have smoothed out the edges. When our hero visits a mental health facility early on it’s not some welcoming, gleaming facade that hides the inequity beneath, it just looks like one of a million shitty cramped doctors’ offices. Likewise there’s no grand descent into the bowels of the facility. It’s just a boring network of mostly clean looking corridors. If there’s one thing which can corrupt the work of masters, it’s giving them a budget that has to be justified.

It’s important I guess to say how this plays in to Steven Soderbergh’s decision to shoot the thing on an iphone. Like, that thing has a look, one as immediately distinctive as any fancy film stock you could use and it captures everything slightly weird. Like last year people were freaking out about Billy Lynn’s Long Halftime Walk and how the extreme frame rate Ang Lee utilised made the performances read wrong. I found the same thing here. Is it possible for a performance to be properly captured by an iphone? Or is it a medium so tied to the concept of liveness that any attempt to fool its gaze will come out stilted.

I ain’t sure, you relax on into it over the course of the first fifteen minutes. When everything starts to get a little nervy and claustrophobic is where it comes into its own. It’s the look of that lens, the uncomfortably wide angle, the exceptionally deep focus. That’s what started to get to me, the freedom afforded the team in shooting means that the film is constantly visually inventive and has a pure intentionality to its decisions, but there’s no escaping the crushing inevitability of that frame.

It clangs out this constant refrain, when we’re so used to films striving towards some sort of beauty there is a nauseousness brought on by this joint’s ascetic denial of those pleasures. A wide shot strands an actor in a wash of empty room, move in close and their faces are stretched and distorted. It’s probably in part the lighting too, but everything seems covered with this sickly pallor. The world that the film creates is a dying place, our heroes the ones desperately trying to survive it.

And survive what exactly? A shitty man is taking advantage of a system designed to disempower those who live within it in order to further abuse a woman in a vulnerable position, and any time she tries to speak up about it those in power resolutely ignore her so as to keep the balance of power in place. The film is entirely about the value and importance of listening to and believing to those with the courage to speak up. I love it, and even though horror movie set in a psychiatric hospital has the possibility of going someplace rum, it actually has a lot of empathy for its minor characters and argues for them to be treated with the care and respect they deserve.

We’re seeing most of this through the wide eyes of Claire Foy. She stars as a businesswoman, recently moved town to escape the memory of a stalker who had followed her for years previous. Alone and without a support structure she signs up to therapy and admits to having struggled with suicidal impulses. They decide to keep her in for 24 hours observation, which quickly turns into a week and it seems the man from her past may be pulling the strings to keep her someplace available to him.

A real specific sort of horror, sure. But if it’s the sort to grasp you it feels fucking potent. I know I’ve read some guides online about how to get help without getting like, too much help just in case it is decided that your manageable neurosis are actually beyond that. You know that in this country they won’t give you HRT if you’re depressed? Like, cos that can’t be the reason for a sour mood in the first place. I had the antidepressants taken off my prescription a while ago, just to get ahead of it all. 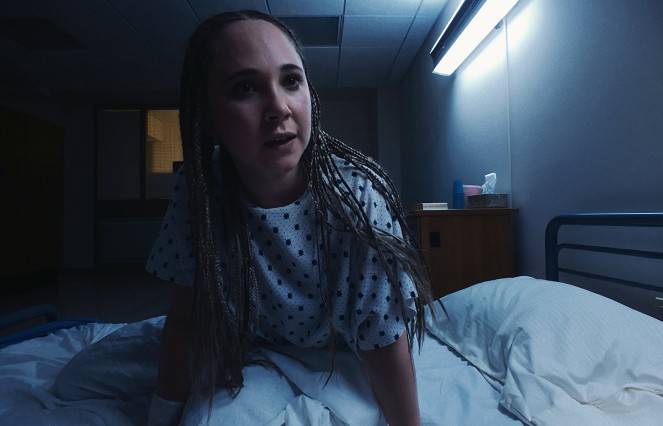 The stalking I ain’t that close to, I appreciate Joshua Leonard’s commitment to the part, it’s an unselfish performance that feels like that banned reddit incels sub made flesh. The film likes to shoot him as a monster, he lurks and creeps, face half concealed in shadow but it gets that the most disgusting thing about the dude is his own fractured sense of self-pity. The film creates something genuinely revolting and if you spend too much time on the garbage parts of the internet it’s all too recognisable.

I mean, the two lead performances are why the joint works despite it being so pared down. Despite its alien shape they find something solid at the base of the film. There’s a subplot going on involving another patient, a friendly face in the crowd, but the guy in that role can’t find structure, he wobbles around never sure of how serious to properly be and so the whole subplot don’t quite take shape.

But If they what makes it work, then it’s the style that makes it sing. There’s the story about Danny Boyle disassembling his camera so Anthony Dod Mantle could go wild with the lensing. In Slumdog everything is in motion. Soderbergh is finding his own way into some personally defined visual stylisation, but his version of distorted is glassy and still. 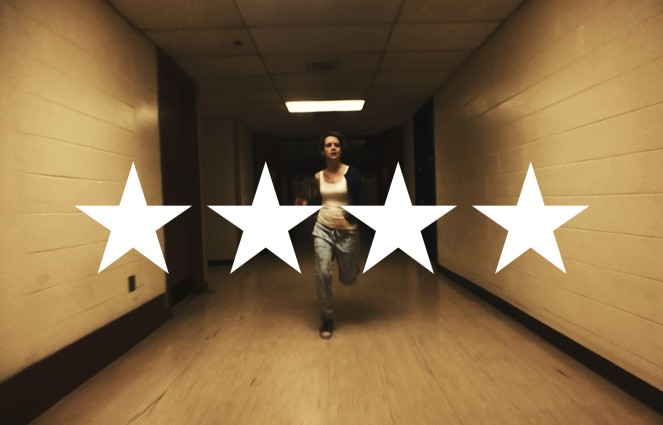 2 thoughts on “Unsane Review – In the glass”