Searching has got me thinking about how we interface with contemporary technology in the aesthetic properties of storytelling. Earlier this year we saw Soderbergh’s Unsane which used the burnt out visual quality of mobile phone footage to great effect in building up its unsettling and uncanny sense of place. This summer came Stephen Susco’s horror sequel Unfriended: Dark Web which built on the first-person, laptop-screen chills of the original by turning its eye upon how the monitor complicates the relationship between audience and participant.

After those two spook-em-ups to lay down the stylistic groundwork (as the genre often is asked to do) we now have one released that by virtue of being a procedural thriller, with a legit star in the main role, can be taken seriously by wider audiences. In a five minute opening sequence we are treated, by way of the creation of calendar appointments, social media accounts, changing desktop backgrounds and file directory layouts – the history of a young Californian family, culminating in the tragic death of its mother.

It’s actually a really nice little contained sequence, in its wordless simplicity it seems to be striving to be iconic. But the tragedy is never acutely felt. It finds itself trapped in the sensory history of the design that it uses to encourage a sense of place. The Windows XP default desktop background and the design of the youtube homepage circa 2007 carry a far greater emotional significance than I think I had even realised having not seen them for years.

Part of what makes films of this style work is the current universality we see in app design. We have moved beyond the utopian futurism represented by 1990s Factory PoMo or the digital analogism of the hundreds of downloadable Windows Media Player skins we had sitting on our hard drives in the early 2000s. The reason that we are now able to read these works so cleanly is the same reason they have the capacity to creep in under our skin. The digital spaces that we now inhabit have been reduced, anonymised, we all interact in the same way and all interactions have become the same.

An incoming notification could mean anything when imessage don’t allow you to add a subject line. When anything could be a threat, and everything is presented to you in exactly the same way, it becomes hard to interact with a system in the way that you did before. A truth that is ably captured between Aneesh Chaganty & Sev Ohanian’s script and John Cho’s marvellous, intimate, spiralling performance as a father whose daughter vanishes one night, seemingly without a trace.

Indeed, the threat of a connected world they draw up here is almost the complete opposite from that of the Unfriended series. They encourage us to be alert of how accessible being connected makes us. That we invite horrors into our lives because we have been available in ways that we once never were. Here the opposite is true: the threat lies in how these technologies alienate us from each other, and from ourselves. Therefore the primary storytelling conceit of the one, a realtime group skype call, never shows up here.

This is never a story about communication, it’s about how we act in its absence. We are not even granted the comfort of consistency. Over the course of the joint we stare at several screens, we jump through time, we’ll be interrupted, find ourselves somewhere new, and while we can always take some comfort that the image staring us in the face isn’t going to lie, we progressively lose what little faith we have in the characters that lead us through it.

About halfway through though the aspect of the feature changes. The story is picked up by local and then national news, it begets a conspiracy theory subreddit and suddenly we are forced to engage with what it means to live when your own story is being co-opted from you. Here’s unfortunately where the conceit starts to fall apart: the intimate voyeurism that the audience are engaged in until this point becomes supplanted by the more publicly sanctioned voyeurism of television news.

As soon as that happens everything starts to become a little more didactic, in order to keep us abreast of far reaching developments we are alienated from the man who struggles at the centre. We stop seeing him unguarded and start seeing the mediatised version of himself that he’s creating for the production. Mirroring unconsciously the multiple identities that his daughter lived online that he struggles to reconcile throughout.

It’s here that the film finds itself without an opinion. It seems to criticise public reaction to personal tragedies, but in its very form acknowledges that without the comfortable narrativisation of events they provide, one would find it impossible to make sense of such a story. When we start seeing news clips they come to the screen unbidden, is Cho’s character scrutinising his own press appearances? In the same way that he is starting to lose his grip on reality by over-scrutinising people’s mediatised lives, so too do we lose our grip on him but by a form within a form.

It’s a fairly functional mystery overall. There’s one big twist which is obvious as soon as the red herring is planted, but it mostly moves along quite nicely. Again, John Cho is wonderful here, he is so often acting at people throughout as the only face on screen that when he finally gets a moment to relax and receive and play off someone his composure is striking. Thrillers have to be lean, there’s no point spending too long to wallow in terror or tragedy. About halfway through this joint he comes to a small personal revelation, it’s the most heartbreaking thing I’ve recently seen. 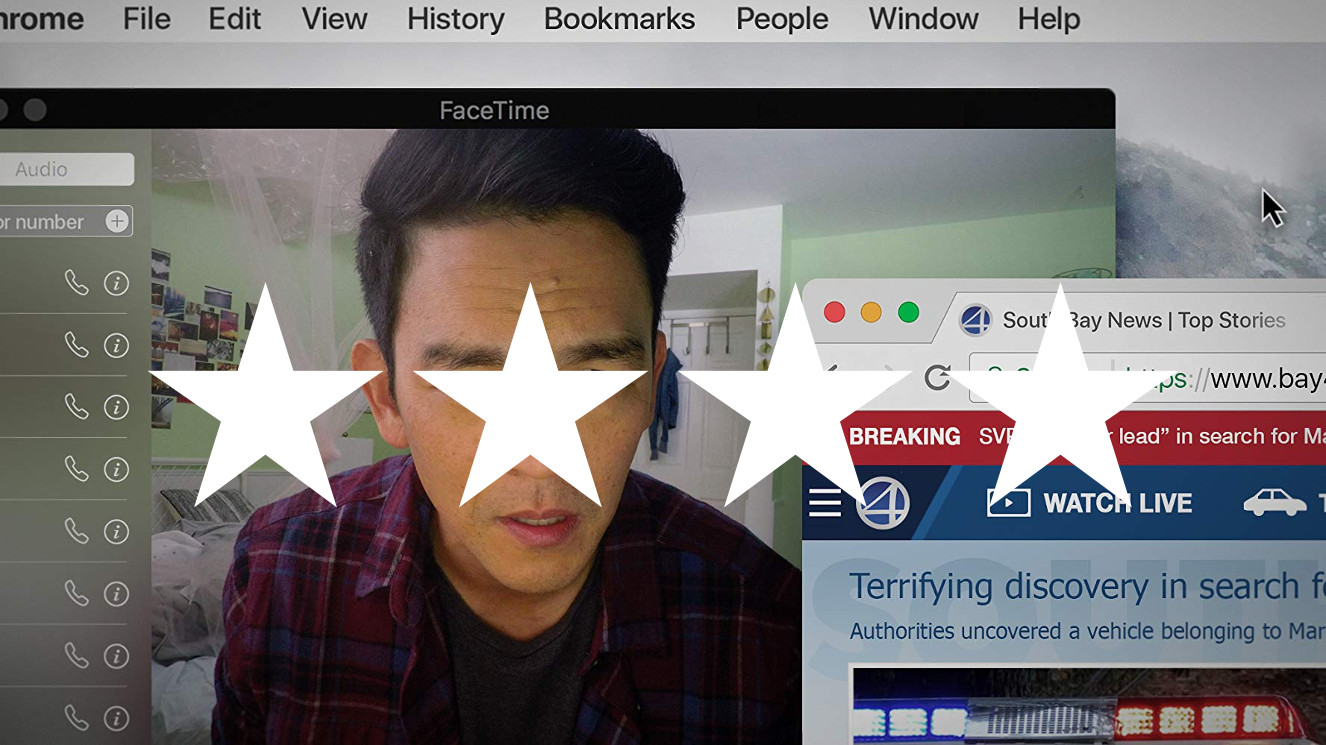