Ocean’s 8 Review – All jewel, no heist

Here’s the thing about Steven Soderbergh, the director of this decade’s Ocean’s 11-13. He’s not a very cool filmmaker. Sure, his films are cool, and as he’s grown they’ve only become more effortlessly so. But the way he approaches them is like watching a masterclass in restraint. He is interested in the primacy of the story, everything must flow out of that. And if the story is cool, that’s great, you follow the story and the characters’ truths and piece by piece the cool will make itself.

Ocean’s 8 is not a film with such an assured hand at the helm. It does not just want to be cool, it needs to be cool. Like the desperation coming off a teenage me trying to make friends in the playground, it can be sensed a mile off. It leaks off of every frame in this picture. There’s a damned vacuousness to it.

I don’t joke when I say that I unashamedly love every single item of costuming in this joint. From Cate Blanchett’s suits, to Sarah Paulson’s immaculate blouses, through Awkwafina’s sweats and Rihanna’s streetwear. And hot damn those Met Gala gowns that they all come out and get a slow-mo walk while wearing. I want to own them all and play dress up.

Likewise, the gang set up shop in this wonderfully designed abandoned mansion, and every time a new team member comes on board we get to see them fashion their own corner of it. Great production design, and it is one of my favourite things to see in a story: the evolution of a shared familial space. We always live our lives out so slowly that it is almost impossible to comprehend how our lives shift and squeal around each other. How our material entanglement becomes an extension of our emotional and ideological identities.

I take my joy in the film where I can find it. The structure makes anything else impossible. Going through you start to wonder when a single beat is going to be taken seriously. They never are. When writing about 2017 Steven Soderbergh heist joint Logan Lucky, I commented that part of the reason we love heist movies is that they consciously decouple capitalist notions of labour and compensation. I going to double up on that here and say that the number two is: making a good film is in itself a successful heist, a series of misdirects and gambles, all planned out in advance, but if executed brilliantly, are able to steal our attention and rationality and our minds.

The heist movie is a double pleasure then: you’re watching a heist, willingly submitting to have another played upon you. The joy of being in the know and yet simultaneously, tantalisingly being kept out of its reach.

Ocean’s 8 can’t achieve that. It doesn’t. It has this script which is incredibly dramatically inert, there’s barely nothing in the engine to push this story forwards. So, it makes up for this with some of the most buck wild editing I’ve seen in a film recently. Like, the transitions are obnoxious and bad but the crime is how the cut throws the film into one of those space saver bags and vacuums all the air out of it.

Like, you’d think that one of the joys of this joint would be spending a neat couple hours with your cool criminal friends. But its insecure impulse to emulate an aestheic sensibility at odds with its form torpedos this. And, like why? The cast here is amazing. When they get the opportunity to throw their energies at and around each other the thing sings.

I was gonna put in a quick power ranking here but it’s pretty much academic isn’t it? It’s a study of indulgences, Helena Bonham Carter’s inconsistently fey Irish twang, that way that Mindy Kaling precisely tilts an inquisitive head. It’s clear that they’re being allowed to perform in ways that they innately enjoy. There ain’t much that comes across as more inviting ain’t there? So why are they given so little? Why is their presence and dynamism constantly diminished so that Anna Wintour can make an afternoon’s worth of cameo? I mean at least she’s a get. Was it worth poaching Zayn Malik for a literal half second?

Or how about Jimmy Corden, who dominates the last ten minutes with his toxic presence, being given all the space to conduct his antics that aren’t afforded to anyone else in the flick. I mean, this one attempts to make him palatable be admitting that the man is a craven willing pawn in the real heroes’ game but… Like why?

I ain’t gonna say it’s because the co-writer & director, Gary Ross, is a man. I’m gonna say that it’s because he is bland choice, a safe choice, and far too technically unambitious to divert from the safety of style even when the movie’s substance lies in an opposite direction.

i know that the dream hiring, ‘Which female director game?’ is probably old by now. Let them make what they wanna make. But really? There was nobody interested? Imma call bullshit. 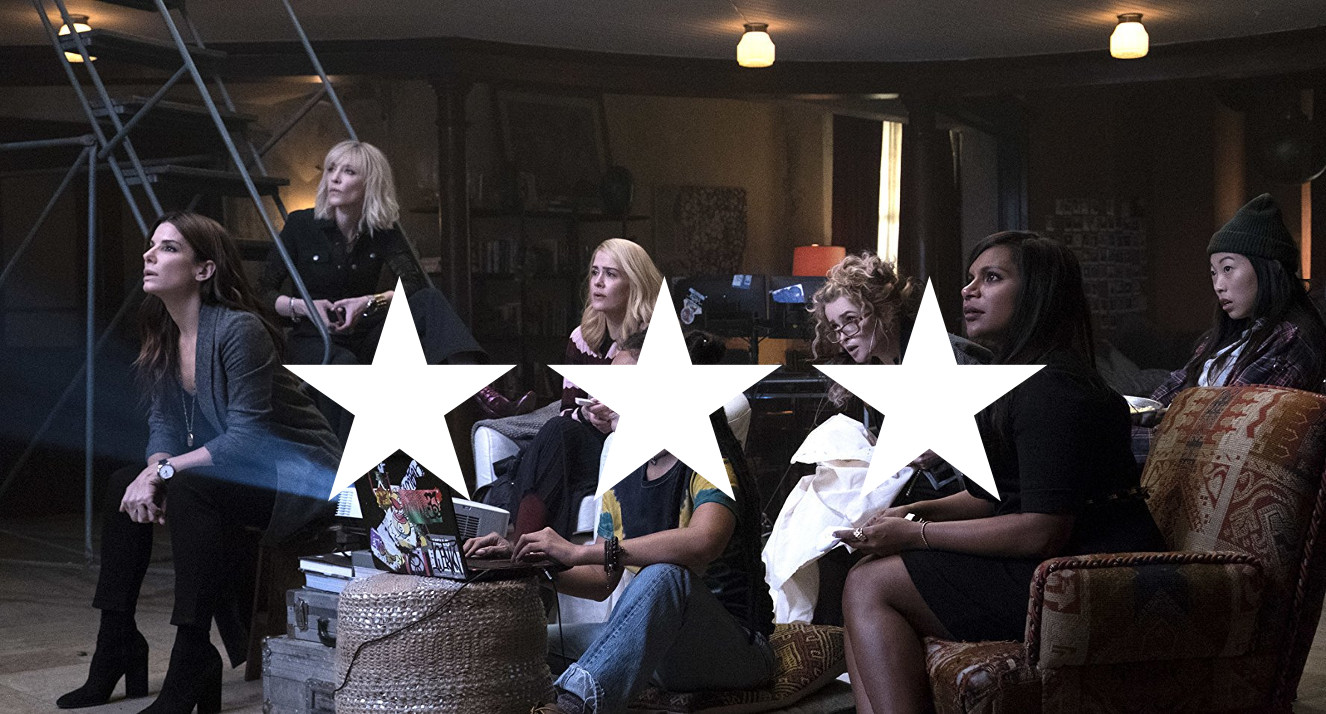