Maybe there’s something to be said for putting a baby in a suit, if only as a critique of capitalist avarice. The Boss Baby was probably sold on its conceit, Alec Baldwin from Glengarry as a baby. It was sold to us on that premise too, there’ve gotta been trailers for this one playing for like six months, and for all people complain about trailers spoiling too much they ain’t given no credit to the trailer for The Boss Baby. It reveals nothing.

The film is hot nonsense. Imma ruin all the good work of that trailer and spoil the flick for you now. The flick imagines a world where prospective babies are judged pre-birth, the vast majority go to Earth, born into happy families; those deemed to be repressed or humourless stay wherever it is babies are formulated and become middle managers in the production process.

The plot begins when one of these uberbabies inveigles they way into the house of Tim, just some regular kid. There’s some jealousy, some pettiness, all that Lisa’s First Word style hijinks. Then the film stops and explains the character’s true motivation. There’s a powerpoint presentation and everything.

The boss baby is here because Tim’s parents are the marketing directors for dogs. Not anything specific, just, like, the concept of dogs. Dogs are getting too cute, the concept of babies is losing market share to the concept of puppies, which puts the boss baby’s job at stake if there ain’t nothing to be done. To this end, a new, cuter, brand of puppy is gonna be released soon and it is The boss baby’s mission to make sure this never happens. An unlikely alliance is formed between the two children, one gets job security, the other their parents’ full attention.

Like, I try not to dump too hard on other people’s stories. We all gotta understand that everything likely means a lot to someone, not least the people who decided the story be told. The Boss Baby tries to avoid the obvious story beats but in doing so goes right off the edge of a cliff. What could be a capitalist satire ends up sorta being a herald for capitalistic endeavour, all the good it brings when pointed in the right direction. Early satirical jabs at the commodification and manipulation of human emotion by brands get, whoops, quickly sidelined by the escalating weirdness of everything.

It disappointing, because there promise to those early scenes. Baldwin was probably done recording those lines before he was Trump, don’t matter, he’s Trump now and you feel that. When the character inhuman and malevolent and spiteful it works so much better, a comic inversion of the horror of the changeling, cos all those fairy stories about the same damn thing. Even the physical comedy dope, but then it changes and it wants us to care, and the emotional stakes of the joint barely register because the film pivots so hard away from its setup.

Hard not to make all my writing now in some way Trump related. Guess what I should really be doing is making it may related, Brexit related, all them fears too close though. So it come down to the same litany of troubles. The film trapped securely in this realm of affluent white society. Like, it’s just a sea of pale faces in this joint but somehow didn’t nobody notice. Guys too, there ain’t no women who get gifted any plot relevance whatsoever. What’s the point of trapping the boss baby in suburban upper middle class comfort? Putting the patriarch in a position where his patriarchy goes unconfronted.

It’s a waste, feels like the flick is desperately trying not to be about things. That’s why we got a madcap diversionary plot, that’s why the ending is so contorted, desperate not to invalidate either side of the dichotomy of love and capitalism that it sets up at the outset, clamouring to make it clear that the two aren’t in fact opposites at all. Nah mate. We’re not convinced, and you just further robbed yourself of the chance to say anything interesting.

Course it’s creative bankruptcy is made clear before then when we got yet another instance of the evil crossdresser. A masc presenting character, who the film lovingly robs of a voice, tasked with keeping our heroes down. Pink dress and five o’clock shadow. Nothing we ain’t seen before, still hurts though. Why do these people keep doing this, especially now?

To rectify this I’ve decided that the boss baby is canonically gay. I know they don’t show him hitting on anybody, cos that’d be, like, super creepy. The idea of him being a queer dude pleases me in a way the film only actually managed to when it was indulging in the visual incoherence of fantasy. Pixar’s dreams are so disappointingly banal, this goes all Black Velvetopia in its dreams and swims in and out of them with an admirable looseness.

If for whatever reason you wanted to go see The Boss Baby: don’t. Go rent Storks instead. It covers all the same material, and it manages to be funnier. More open-hearted and diverse too. Ain’t no reason to support this flick’s cowardice. 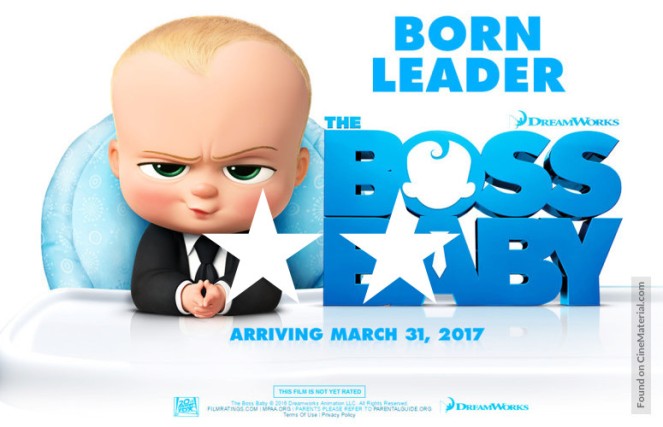 One thought on “The Boss Baby: A wee bit childish”