I’m not sure why Cyanide Games was up for this. I mean, they’re a French studio, the film’s a French, Danish, German, British coproduction, I guess Paul Verhoeven has some nerd credit given his sci-fi work throughout the nineties. They ain’t a very big developer, perhaps they thought it might be some good publicity. Someone must have given them the script though, explained the scene where Styx, the lead character from their biggest franchise, is depicted having sex with a digital Isabelle Huppert, someone went out of their way to animate that too. It ain’t a very respectable portrait, although given the sometimes tawdry nature of that series not an unsurprising one, it’s just strange to see them willingly take that association.

The reason they there in the first place is that Huppert’s character, Michèle Leblanc, is the director of a successful game studio, having previously worked in writing and publishing, she has an intelligent collection of friends, family and exes to surround herself with. The film opens on her rape, untrusting of the police, given her treatment at their hands as a young girl, she refuses to report it. We watch her struggle to reconcile her reaction to the event, the desire to not let the event define her, the desire to unmask and enact revenge upon the culprit.

I think it was a podcast I was listening to recently, maybe Buzzfeed’s Another Round, although I could not say for certain. The guest was arguing that we should stop seeing violence against women, especially sexual violence as an aberration, but rather as an inevitable outcome of the inequities of our society. When we can do that we can start to address the societal violence enacted upon women. Part of their takeaway was that the gendered violence is investigated and punished by a patriarchal system is incapable of producing a positive result for the women who are victimised.

It’s controversial stuff, and thought provoking, Elle exists in the same space. We all know Verhoeven has a dark sense of humour, but this may be his blackest yet. It feels reductive to view Huppert’s performance as a comic one, she was nominated for the Oscar of course, which like, don’t happen too often for the non-English speaking, but her precision in this role is just it. How she manages to do so much with a role that asks her to be holding everything in. She flashes back at one point to her assault, but in her mind grasps an ornament and caves the man’s head in, back in reality a faint smirk plays across her face. Maybe it’s too awkward to be laugh out loud comedy, especially when you’re in a theatre and there’s like actual other people there, but come on, come on.

Yeah, rape jokes are a tough line to walk, especially when we’re talking a film written/directed/produced by dudes. We say all the time that there’s no right way to react to stuff. To grief, loss, suffering, sex, what we really mean of course is that we ain’t gonna judge you out loud, at least not to your face. Setting out to take revenge upon the men who have wronged her across her life she makes a whole catalogue of the wrong decisions but nobody’s allowed to judge her, not after where she recounts her assault at a polite dinner, immediately regrets it and tries to get everyone very interested in the menu.

Cos at this dinner is her ex, and the dude she’s having an affair with, and his wife. Running around the sidelines are her mother and her new boyfriend and her son with a girlfriend just given birth to a baby with suspiciously dark skin for a white couple. Yeah, this film all up in discussions of sex politics, I suppose it’s trying its hardest, it’s got a lot to balance, after all. I guess I just can’t speak for its taste, look, we all got different opinions on these things, I am personally blessed to never have been a part of any non-consensual sexual activity, but I can’t speak for anyone else.

It wanna be provocative, I get that, and its depictions of assault are flat out terrifying, but any argument you hear about it being exploitative, is an argument to be considered. I’m honestly not too sure where I fall on the line myself, as the flick starts playing its hand, revealing the inequities of its world, it toes closer and closer to being a bit gross, and the closer the frame gets to Huppert’s tortured face the explicit sexual violence, I get like, ‘You sure you ain’t enjoying this, film? It sure seems like you are.’

But maybe that’s us. Early on we see her buy her mace, a hand axe and we all can’t wait for her to start fucking things up. Her revenge eventually comes and it’s nothing like we want, it’s unexpected and creepy and all wrong. It’s allowed though, it got to be, it just don’t line up with anything culture teaches us about this sorta thing. The film starkly contrasts this against the state, and the crimes of her father, how much easier it is for us to contain slaughter than sex.

Verhoeven seems to be determined to court controversy with this one, all those statements about how it couldn’t possibly be made in America which, eh, maybe. Seems to be the wrong thing to focus on here. You wonder if the provocation is the point of it all, and if so what’s it provoking us towards? I ain’t really sure, what does it have to say about sex-positivity when its only relationship to sex is negative? Likewise, it praises all these characters who refuse to be victimised by the world, but in doing so it struggles with the implication of those who might be.

I often ask if I expect too much from the art I consume. I try to stay realistic, I try to stay levelled, is an imperfect discussion not better than no discussion at all? If you’re gonna get didactic then no polish will change your arguments, and, you know, it’s troubling that this argument here is one almost entirely constructed by dudes. It’s an immaculate film, a taut and economic thriller, pacey and twisty and funny. Maybe Verhoeven’s eye is different to mine, maybe this discomfort was intentional (probably so) but I get the sense that there’s something rum here, who knows, maybe you’ll figure it out better than me, and there are far worse flicks to catch. 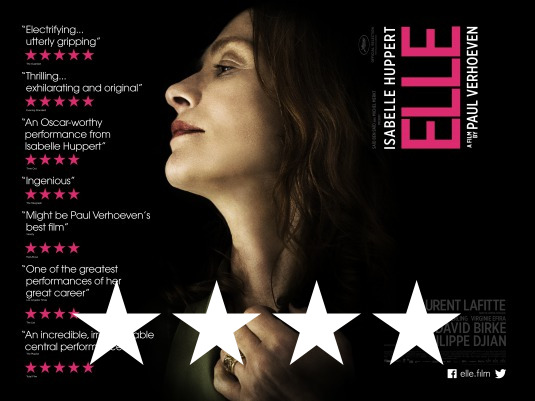 2 thoughts on “Elle: A rape comedy”