A couple of my theatre friends are performing in an upcoming adaptation of The Yellow Wallpaper so I guess I’ve been thinking about that short story a lot. I first read it as a part of an English class when I was like fourteen, not entirely sure why, just one of those things you can use to fill two lessons when exams aren’t a pressing matter I guess. So we read the first half in class, and because I was eager; found it online and read the second at home that evening.

Gave myself nightmares for days. After the weekend, going through it a second time in class filled me with a peculiar dread and I don’t remember any of my classmates being so affected by it. I’ll say that it comes to me as no surprise that the looming structure that towers over the solstice festivities depicted throughout this film is the same sort of burning sulphuric yellow described in that story.

Aster gives his horrors an aesthetic like no other working director, especially in the way he shoots his sets. They’re depicted with a eye turned to the ridiculousness of their artifice. It seems extraordinarily amusing to the film that these structures would be constructed for no other purpose than to support its existence. Designs come off silly and improbable: the bunk house where our leads sleep with its open and unsupported second story, the elder’s hut with it’s gabled roof and too small windows, and the improbably painted pyramid that sits off in the distance.

They are overlit, drenched in the film’s blinding white light, and yet the clarity forces us to confront our own lack of comprehension. For a film about being an outsider, a witness to something that you do not fully understand, and yet have no choice to participate in, it’s unblinking gaze becomes something cruelly hypnotic. Especially so when things take a trip to the hallucinatory, and the previously solid world starts to warp and weave before us.

Like Gilman’s seminal work, Midsommar is a film about the experience of being a disempowered woman. Florence Pugh’s Dani is a student who starts the film having experienced a traumatic loss, her boyfriend can’t quite build up the courage to break up with her, his friends admit in private to not liking their relationship, and against everyone’s better wisdom they’ve dragged her out to a Swedish commune where they plan to variously study for their thesis and participate in the ceremonies.

This is resolutely her film, one doesn’t put Pugh in the centre of anything and expect her not to own it. A powerful distinction is cut between the strength of this character and the way those around instruct and discard her as is convenient.

The men she’s travelling with are Jack Reynor (the boyfriend), William Jackson Harper (his classmate), and Will Poulter (an asshole). It seems mostly in their undoing that they approach this place with judgemental eyes, for all their talk about anthropology they seem to carry very little respect for the events that they are being witness to — at least the British couple how show up briefly in the background have the sense to act authentically, engage emotionally with the situation, these folks stand back and stare their smug stares.

How adorable, how quaint. Quickly their friend, the one who invited them, is lost among the identically clothed inhabitants of this place.

Cult horror plays into our fear of assimilation. As an individualistic culture what does it mean to lose that part of ourselves? The imagery here, the sense of being overwhelmed by an invasive nature, reminded me of Tessa Thompson in Alex Garland’s Annihilation, finding peace in giving herself over to the Earth. The land is aggressive and consumptive. It takes from us, and to live in harmony with it means sacrificing part of yourself.

Is that the worst horror for today’s comfortably destructive capitalist society? Being forced to confront that things might need to change somewhat radically if we’re to continue surviving, lose some of those comforts we take for granted. Pugh’s character is the only one who can see this, her end times are already upon her — a fact that goes unappreciated by her buffoonish companions.

I’ll admit to not expecting this to be as funny as it is. I guess that’s part of the benefit of it being what, two and a half hours long, it has time for you to get a sense of its rhythms. All the while, not even backgrounded, the weird shit is escalating and the time dedicated to those clowns petty squabbles becomes more and more the part of some grand cosmic joke.

Aster has apparently said something about this being based on a breakup that he went through and I kinda hope that the guy has a healthy conception of himself. The movie’s pretty mean: to the boyfriend character, to the women who make up this sorta matriarchal society. When a guy with poor English skills struggles his way through explaining the ‘hermaphroditism of nature’ you can feel the smirk and you’re like, ‘is this fucking dodge coming from a straight man?’

Like, I’ve no idea what he’s trying to say on the essentiality of gender. His choice to not reveal the motivations of the cult in any explicable way rather frustrate, and the nighttime presence throughout of a constantly crying baby provoke questions that one almost wishes would be answered by the ‘all women are inherently evil’ outlook of something like Von Trier’s Antichrist. Like, when he introduces two mysterious buildings and one of them is very phallic, and the other very womblike, I mean, it’s hard for those eyebrows not to raise.

For Aster’s part I’ll say he’s either close to getting it, or like does, but is still figuring out a way to express it coherently. I guess the main thing is that he keeps making movies that force that thought process to be externalised, and as an audience it’s a strange texture on top of everything else.

Like when someone asks what’s with the bear, and then the camera pans to reveal a caged bear just sitting off to the side of the action, there the whole time. It’s a good gag, but his work is lithe like that, spending time slowly exploring characters and spaces while all the while there’s a fucking bear off to the side.

Maybe it’s best to approach these kinda films with skepticism. Maybe all it’s trying to say is that women be crazy, but I dunno, back when I was fourteen I had classmates who read The Yellow Wallpaper the same way, couldn’t understand why it stopped me from sleeping for days. Watching this through the lens of like how men act (and react) to women that they refuse to understand I started to see something very similar. 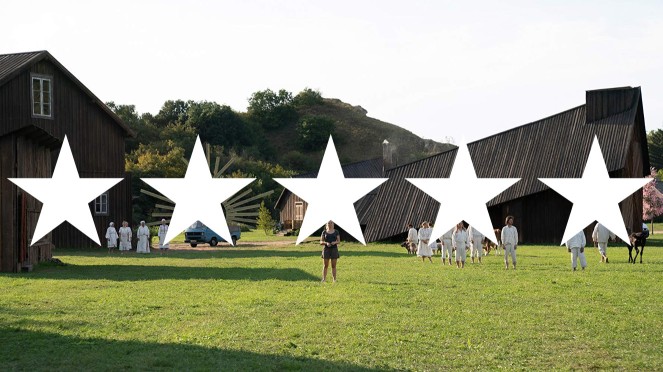 Image courtesy of A24