So, in the movie Paul Blart: Mall Cop 2 there’s a scene where the hypoglycemic hero has a drop in his blood sugar level and collapses on the ground. Kevin James, giving an unconvincing physical performance, must flail around the lobby of the Vegas hotel where the film takes place until a child’s melting ice cream drips into his open mouth. You can find this scene on youtube.

In the middle of an action beat in the new film in the Millenium franchise, The Girl in the Spider’s Web our hero Lisbeth Salander gets injected with some sorta unspecified paralytic. Near comatose on a bathroom floor she manages to knock a medication bottle off of the sink, the label reads ‘amphetamines’. Claire Foy, embodying her physicality far better than James, manages to crush up the pills and faceplant into the powder. She’s back on her feet and ready to continue the chase.

The Girl in the Spider’s Web is undoubtedly a better film Paul Blart: Mall Cop 2 but I just wanted to emphasise how closely related are the circles in which they run. It’s shock, pure and simple and unrefined. Based on the continuation of a dead author’s work commissioned by inheritors that it seems clear that the artist did not want in possession of the intellectual property. Built by a different director and screenwriting team, and using an entirely different cast from the previous film in the franchise.

If it weren’t seven years on now and just about entirely unrelated, the project would probably be more publicly dismissed as the obvious Hollywood cash grab that it is. Yet here we are, forced to kinda take this movie seriously. You know why we can? Because fucking everyone wants to be Lisbeth Salander. You know how Tom Hanks keeps popping up in those bizarrely successful Ron Howard directed Dan Brown adaptations? Find me a single person alive whose dream it is to be symbology bore Robert Langdon.

Because that’s the realm that this joint is playing in, international conspiracies, shadowy crime syndicates, American government operatives of suspicious intent. Though this one is played with charming ineffectiveness by superstar cutie LaKeith Stanfield and you know that there ain’t no hating that face. Everyone’s after a computer program with the capability to launch every nuke in the world after Lisbeth steals it on behalf of its now remorseful creator. So just like all them joints its a chase movie.

Which is no bad thing really, just kinda a dumber one than you’d hope for. Director Fede Álvarez does a fine job of keeping the pieces in motion, everything runs smoothly enough. The more convenient happenstances are glossed over quite neatly, generally buoyed by a lavishly overdesigned production sensibility. Meanwhile it is condemned by the source material’s obsession with delving into the past. We are early on informed of our lead’s abusive childhood, we remember from the ‘previous’ instalment that she has a history of rape, and yet these never register in the way she is portrayed outside of their foundational elements as the most badass chick of all time.

She’s a delight to watch. Her enemies might be able to set her back a couple of steps behind the game, but the woman moves at a pace that has her catching up in no time whatsoever. Even if hacking is presented in the laziest possible way, a no problem solution to any problem that can even be executed from her mobile. With her distinctive look, and coterie of sidekicks she’s basically a superhero in this incarnation. Steely, resolute, statuesque. It’s an enviable role for anyone, sure, but a disappointingly shallow interpretation.

This incarnation is approachable for one, it’s there in the way she makes herself available. We are presented with this version of the character who seems to be desiring of connection, who wants — even through her manipulations — to be understood. Even the final moments of the film are dedicated to the mostly forgettable co-lead Sverrir Gudnason (of last year’s Borg vs McEnroe) coming to a personal revelation about the motives of the woman we actually care about.

His anonymity ain’t really entirely his fault. He’s gotta be the one imbued with some sorta character arc because god knows everyone’s far too precious to do anything with the actual lead. Yet they’re not invested in him enough to actually give him anything to get working on himself. I guess it’s probably the least we can ask, just keep the token man outta the way.

It’s bad I guess, we probably want more from movies than this, don’t we? But we just don’t get this kinda movie, not with this kinda lead, not with somebody who I regard with a desperate aching desire to be. I enjoyed it, the same way as — for my sins — I kinda enjoyed Paul Blart: Mall Cop 2. Whatever, go see Shoplifters if you wanna catch something great in cinemas, go find Unsane if you wanna see Claire Foy give a better performance in a better thriller.

Catch The Girl in the Spider’s Web if you feel vulnerable so often and just wanna be reminded of your strength.

Or don’t. Your money’s gonna end up in the wrong hands if you do.

The Girl in the Spider’s Web is currently screening in UK cinemas. 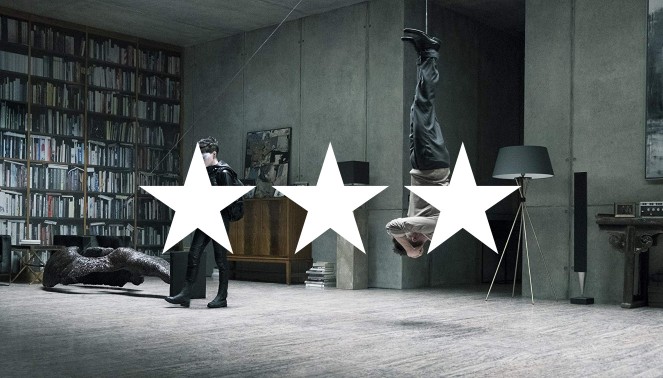