To celebrate the centenary of the Great War, one of cinema’s great technical fabulists has attempted to change the way that we process our history. Peter Jackson has colourised, digitised and converted into 3D the cinematic and photographic documentation of the life of British soldiers on the Western Front. Of course this caused controversy in the world of film preservation, whether it was right to adulterate the footage in this way. Should one provide voices to the men caught only in video 100 years after the fact? Is it possible to add colour without adulterating the political and aesthetic intent of the original documentarians?

For the most part the arguments seem pretty much moot. The film seems to be approaching the enhancement of its material with a specific purpose in mind, and it’s not seemingly to make it more ‘immersive’ or ‘realistic’. The process that the film is subjected to in order for it to appear here makes it feel strange. It warps and flickers imperceptibly in ways that natural images — even decayed ones — don’t. Rather than serving to convince us that these things really happened, we are constantly reminded of the artifice inherent in their recording.

That feeling spills. The narration that runs throughout the joint is all archival recordings, first-hand accounts from those who served kept for posterity. Jackson chooses not to credit any individual voice, having a wealth of experience and insight flow into and around each other in an attempt to create the ur soldier, the omnipotent voice of an army. Yet we are made starkly aware of its incompleteness. Despite all the effort, there can be no voice for the dead.

Between these voices and images are dictated the history of the war. It has been widely publicised that a copy of this joint will be distributed to every school in the country. This moves with regimented precision through the same lesson plan that I sat through at age thirteen. The incitement of the conflict, recruitment and training, the rapid advance in military technology, trench warfare, and so on, and so on, and so on. If you are more than passingly familiar with the war this must represent a textbook brought to the screen.

But I studied from that textbook when I was too young to properly comprehend authorship, when I was being told by a teacher that the truth of the events taking place was more important than their packaging. It wasn’t until a few years later that we were taught sourcing and resistant reading, all the sorts of things that actually make reading histories interesting. Through the manipulative use of video and audio montage, and the deliberate elision of the original authors, we are forced as an audience to critically engage with the work before us.

As a country I think we’ve mostly settled on the conclusion that the First World War was an unmitigated disaster. A pointless and tragic loss of life, yet the voices that we start to hear harpoon this notion. We hear people who joined up because they wanted to fight, because they wanted to kill. Those profoundly unimpacted by their experiences and those who retreat into narrative comfort to distance themselves from the horror. There’s only a single time throughout that we hear a voice to be genuinely stricken in its visitation of their past.

To hear these voices, to be invited through the form to question them, shatters the way our nation has mythologised the war. By grounding it in the personal we are invited to distance it from its place as a purely pitiable time in our history and consider its true impact on the lives of those who lived it. Including the chilling notion that for some, there may have been very little impact at all.

We’re going to be coming up on Remembrance Day in a week with all the messy discourse that will inevitably entail. They Shall Not Grow Old reminds us to be wary of those who seek to author history. One shot, seen in the trailer, of a brilliant sunrise fades before our eyes into its original state. The sky washes out to a uniform white. Was the morning light verified to look like that that one day, or was it the invention of a colourist interpreting it to their own aesthetic tastes?

So it goes too with history. Here we are offered honest depiction of its untrustworthiness.

They Shall Not Grow Old is currently screening in UK cinemas. 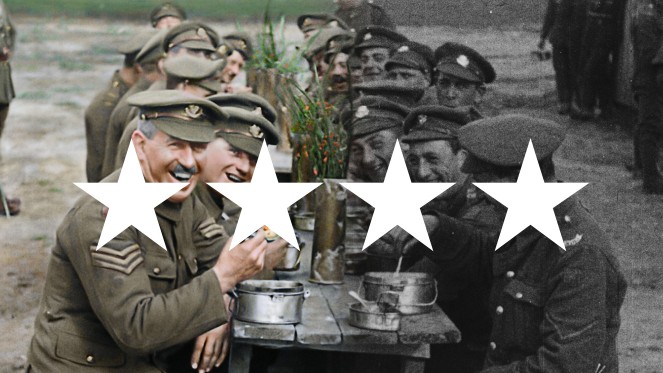