The way that Crystal Moselle shoots skateboarding feels a lot like anybody else would shoot flying. It is loose and liberating, the camera gliding alongside as they perform, humanity captured in the shared joy of movement. The drama of Skate Kitchen comes in the fact that this promise is not one held up by society. While the skate park should itself be a meritocratic space, your skill on the board legitimizing your right to ride, it is not immune from the prejudices that consume the rest of society.

We see this from the opening moments, Rachelle Vinberg’s character Camille stacks it hard at her local spot. As her leg bleeds we hear the taunts of the boys at the edges, ‘Man, she got her period.’ It is immediately obvious that in this space she will not be able to claim any of her actions as her own. They will always be translated through the lens of an audience that will always view her as an outsider.

When her mother bans her from skating she takes the opportunity to look further afield for an audience that will appreciate her effort. She travels into New York to join up with Skate Kitchen, an all-girl crew she follows on instagram. Moselle’s only other feature to date is the 2015 documentary The Wolfpack, a New York story about brothers who were confined to the family apartment for much of their life up to the point of filming.

While lightly fictionalised, and starring one recognisable actor, this new feature follows in mostly the same vein. The members of the real life Skate Kitchen are thrown up on screen in full force. Outside of the mostly unnecessary family drama subplot we spend our time with these women as they drift through the streets and parks of the city, looking for places and opportunities to amuse each other.

Towards the end of the first day together we get an extended sequence of Nina Moran’s character Kurt trying to explain to a hardly captive audience the Mandela Effect. There’s a looseness here that feels inspired by her work on documentary. The camera fragments the characters drifting from lecturer to audience, seeking out the most interesting thing to look at, cutting to other material if there’s nothing visually compelling in the scene. The film does not want to drive its audience, invent something to compel its characters, it is content enough to enjoy time spent with them just letting them be.

Drama eventually does come their way, in a boy shaped package the size of Jaden Smith. The group tells Camille to avoid him, one of the other members Ardelia Lovelace’s Janay shares an unpleasant history with the dude. But the fuckboy seems cute and takes pictures on an old film camera and seems interested in her. Smith does fine, considering his reputation, but the film equally don’t seem to e too invested in making you love him. He’s an interference in the sisterhood we see forming.

Because all the external drama keeps getting in the way of what is the most compelling aspect of the feature, the new and awkward Camille learning how the social dynamic she is entering works, and how she will fit into it. There’s not too much need for a disapproving mum when we are told from the off that one particularly bad bail can properly fuck you up. Which is followed through on when someone does after being peer pressured into attempting a trick they’re not comfortable with.

It’s only a small thing, her friends all remind her that she’ll be back on the board in a couple of weeks. You can tell though in moments like that that Moselle understands the intense fragility of the bonds that hold us together. Especially when who we are is tender and unformed. Vinberg with her nervy eyes and stumbling diction perfectly captures that moment in life, and the insecurity of being surrounded by people who know who they are.

Nobody comes into this world fully formed, Skate Kitchen exists for the pain and joys you find while becoming. And for the people who will help you along the way, even if they don’t feel like they are. I think we might be arriving at a good time for coming of age pictures, the last year has had a few great ones. And guess what, they’ve all been written and directed by women. They all approach their subjects tenderly and with compassion. They all seek to highlight the freedom that comes through having taken ownership of one’s physicality.

These girls are out there doing it. They deserve a movie for the trouble. 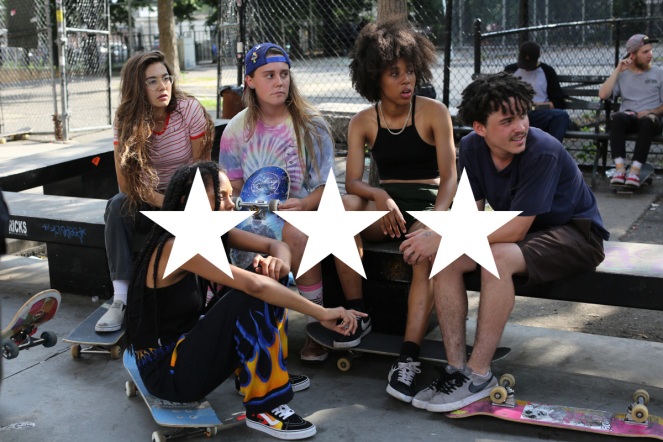