I guess after 45 Years Andrew Haigh could pretty much take on any project that he liked. It seems fitting that he’d reach for a story taking place at the other end of life. Of all the ages that the young protagonist of Lean on Pete gives the youngest is fifteen. I think that’s the one that we’re supposed to believe, it’s the one that he gives when he has the least to prove, when the cruelties of the world have finally ground him down enough to be honest with those around him. I guess it is just a reminder that pain can be keenly felt whatever age you are.

It would be reductive to say that Haigh’s primary focus in his work is the actor. I mean, the dude writes his own scripts and his films are so regularly beautiful. These are aspects of his work that can’t be ignored. But he tends to crush so much down to the internal; his characters are worlds unto themselves until their vibrancy is let to spill over out into the world around them. The landscapes they inhabit becoming an extension of their lack of control.

Whatever though, all that can’t work without an actor in the centre of it strong enough to carry the weight of that meaning. In Charlie Plummer the film has basically found its young mirror of Charlotte Rampling. The young man has been about a while and did a wonderful job playing a variety of trashboys throughout cinema last year. Those always seemed to be playing up his hardness, the scraggly mop of hair and wiry frame that Ridley Scott captured, the hard lines though his face brought out in The Dinner.

Here he is playing hard into his youth. The film decks him out in these ill fitting clothes, most of the time he’s wearing a stained trucker cap. It’s like the world has forgotten that other teenagers exist, hell there might not even be a single character in their twenties in this joint. Charley (with a –y, the name of the character) is the lone watcher of this dead and dying world.

Desperate to help his deadbeat, single parent father out with some cash he scores a part time job working for Steve Buscemi’s Del, a racehorse owner with a chip on his shoulder over his aging animals, the cost of their stabling and the death of the sorts of independent race tracks where he can ply their trade. He travels with Chloë Sevigny’s Bonnie, a jockey whose determination to win might not be result in healthy outcomes for the animals. The casualness of their depravity, and the care that they show to their young ward are beautifully balanced.

The film plays whole gentle scenes in masters, allowing these characters to lull us into the rhythm of their lives. Scraping by, living fitfully and unhealthily among the dust of those Middle America states. Buscemi’s ubiquity makes it easy to forget at times how masterful he is, Sevigny turns up rarely enough that she constantly surprises every time she appears on screen. The two of them come into the joint with a chill enough energy that their connection with Plummer seems instant and in the slightly irascible way that they both share.

After enduring a series of humiliating and traumatic events in his family and work life, ending in Del selling his best horse friend out for slaughter, Charley takes off. Steals the truck, the horse box and the titular horse Lean on Pete himself, determined to trek across the country to find his estranged aunt, the source of most of his best childhood memories.

From there the film turns into a travelogue type deal. We see boy and horse journey across the plains, the people that they meet along the way, the scrapes that they get into. It settles into a comfortable place in the American Road movie tradition, grifters and dreamers brought to bear by the hard and unforgiving reality of contemporary life.

This is also the regard in which it most suffers, the film never feels as well observed as it should. Charley passes through roadside diners, Iraq veterans, homeless communities all sketched out in broad strokes. We get the sense of the tenor of life in the dying heartland but never its unique and discordant melodies. The characters never quite honest enough to reveal themselves too us, and the film too interested in its lead to properly interrogate them about it.

I’ve been spoiled maybe but watching this my brain went back to two of last year’s best films: Kelly Reichardt’s Certain Women, and Chloe Zhou’s The Rider. Both portraits of quiet rural life in Middle America. Those seem revelatory in a way that Lean on Pete in its expansiveness never quite manages to breach. Yet Haigh’s film comes mighty close, especially in the most important aspect. It is a heartfelt, caring tale about the struggles of living in the way of the past. And the pain that comes in having to give it up.

There are moments here that are just ruining and as we go the camera retreats further and further from Charley’s eyes, just as we see his soul retreat further and further into him. It is so hard for all of us to let our guard down, the film’s final triumph is in at last giving this tormented, broken boy a chance at living again. Would that we all could be so lucky.

Lean on Pete is currently screening in UK cinemas. 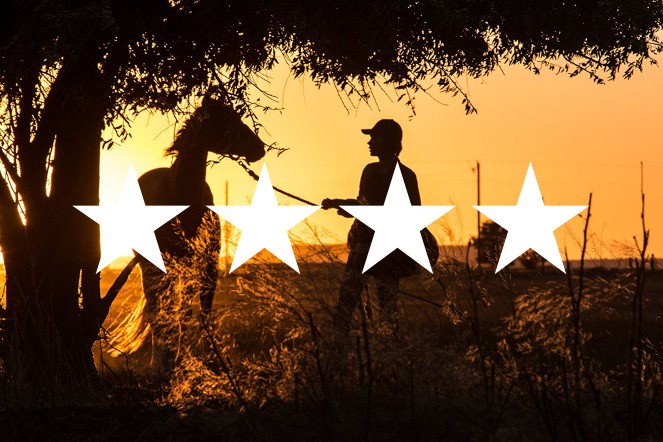