The twist at the end of Tully comes pretty much as expected for anyone familiar with Diablo Cody’s body of work, it plays right her preoccupations as a creator. You know how people enjoy dismissing artists work by pointing out the themes that they enjoy exploring, reciting the trivia list of their IMDb page as though that amounts to substantive criticism. Whatever, Cody’s writing has always been intergenerational, the interesting part of her evolution is in where she chooses to lay the focus.

Her protagonists have more or less grown with her, here Charlize Theron is a mother of two we open on her starting maternity leave as she expects her third any day. Concerned for the stressful lives of their working family her wealthy brother pays, against her will for some home help. A night nanny. Someone who will keep the baby at night, help out with whatever can be done while not waking everyone else, and pass the baby on to mummy when she be wanting them 3 am feedings.

I mean, the first clue that something might be up is that the nanny in question ain’t some lower class parent desperate for the cash that a solid and fairly relaxed night job would provide while their kids be asleep. Instead she’s Mackenzie Davis, young, crunchy in that relaxed hippyish way that actually comes natural to some people. She’s got the kind of free-wheeling wild life that a mother of three can’t possibly hope to lead anymore with the responsibility on their head.

So the film relaxes into its escapism, a chance to see a working family enjoy the privileges that are afforded to those who can afford them. After watching a harried woman deal with a world that is all too happy to dump its judgement on her, while being supported by a husband whose work and hobbies keep him all too distant. We are allowed to relax into a world of comfort and vindication.

There’s an undeniable appeal that comes with watching good things come to those that deserve them. We see how Theron carries her character, Marlo. The way her body folds around that pregnant belly, the protection and self pride of the strong made vulnerable. Reitman uses the camera and costume to create a beautiful portrait of this woman, all baggy cardigans and sweatpants. She occupies the frame like a monolith, resolute. And somehow, despite living update New York, Nanny Tully is able to drift around in loose tees and tight jeans.

How many films do we get hitting wide release that are just about mentorships between women? It’s like we’ve either got the unproblematized depiction of strong male uplift, or the version of that which takes into account toxic masculinity and is just depressing on all counts. Here’s a tale of women looking out for and supporting each other. All the rest of the film melts around that, the financial trouble with the brother, the emotionally absent husband, the two already existing kids, fall away to mostly background.

Theron and Davis are great together. They fall into the other’s rhythm perfectly, long scenes of dialogue play out mostly uninterrupted as the two of them bounce back and forth between Cody’s words. You’d think her style might have become pat ten years on from her debut but the words still crackle off the page. If anything they feel more relaxed, we finall have the experience to understand them. The loose drama effortlessly intertwined into comedy.

I remember watching that Bobcat Goldthwaite joint God Bless America where a character in the midst of a rant calls out how annoying and bad Cody’s writing is, as though his script were anywhere more refined. Maybe it’s just that her imitators don’t do it so well, maybe in the hands of lesser actors and a director who don’t understand its meter it don’t work as well. But don’t dismiss this screenwriter who’s writing honestly about relationships between women; who’s writing about the impact of mental illness and disability on families; who’s navigating through drama the personal and societal intersection of class and wealth?

Tully ain’t all that revolutionary but its form is smooth. There’s all these films which want to be advocates for compassion and decency that don’t have the courtesy to extend that to the audience. If a film wants to make you a better person it needs to be something to be endured. This joint’s function is just perfectly aligned, Reitman’s quiet direction is unobtrusive. Take the time to relax into the film, find comfort in the happiness that it is depicting. Feel the mood as it champions a woman who we don’t get to see celebrated that often. 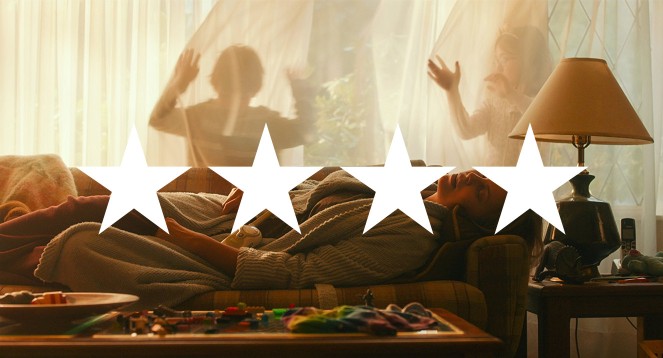