Lady Bird Review: Everything I couldn’t be

There’s mess in the life of Christine “Lady Bird” McPherson. Nothing quite adds up for her in the way it’s supposed to, or maybe she’s just getting the sums wrong. It’s telling in a way that the character is bad at maths and you ever really find out what she’s good at. Aside from making a scene, or trying to be about as alive as she can be in any given moment. Her impulses rarely serve her well but they’re hers.

Lady Bird tracks the last year of high school student in Sacramento. Or, to be more accurate her last year of high school hangs around the film, this film which at its core charts the contentious relationship between Saoirse Ronan’s Lady Bird and Laurie Metcalf as her mother. It’s an ensemble flick I guess, a big cast, characters floating in and out in that mercurial way that they do when you’re an insecure and self-absorbed teenager. The beauty of it is that there is never a single moment which isn’t informed by or doesn’t register on their relationship.

Because this film understands love. And sure, maternal love is a part of that, but love, and surely a Catholic love like we see here wants to be open and embracing and kind. After the performance of the school musical that happens at some point in the first act the Father who directed it is in tears, ‘They didn’t get it.’ he sighs. Everyone is aching to be understood and it is only themselves that stand in the way of their own connection.

More tears here, the film begins with begins with the mother and daughter sharing them after listening to an audiobook of Steinbeck’s The Grapes of Wrath. See how quickly the scene devolves into a fight, and not because of these characters animosity but because of their care for each other. Greta Gerwig constructs her script with such precision, each line is self explanatory, each line exists to be believed. Yet she understands that the truth of the moment is not the truth of the line. 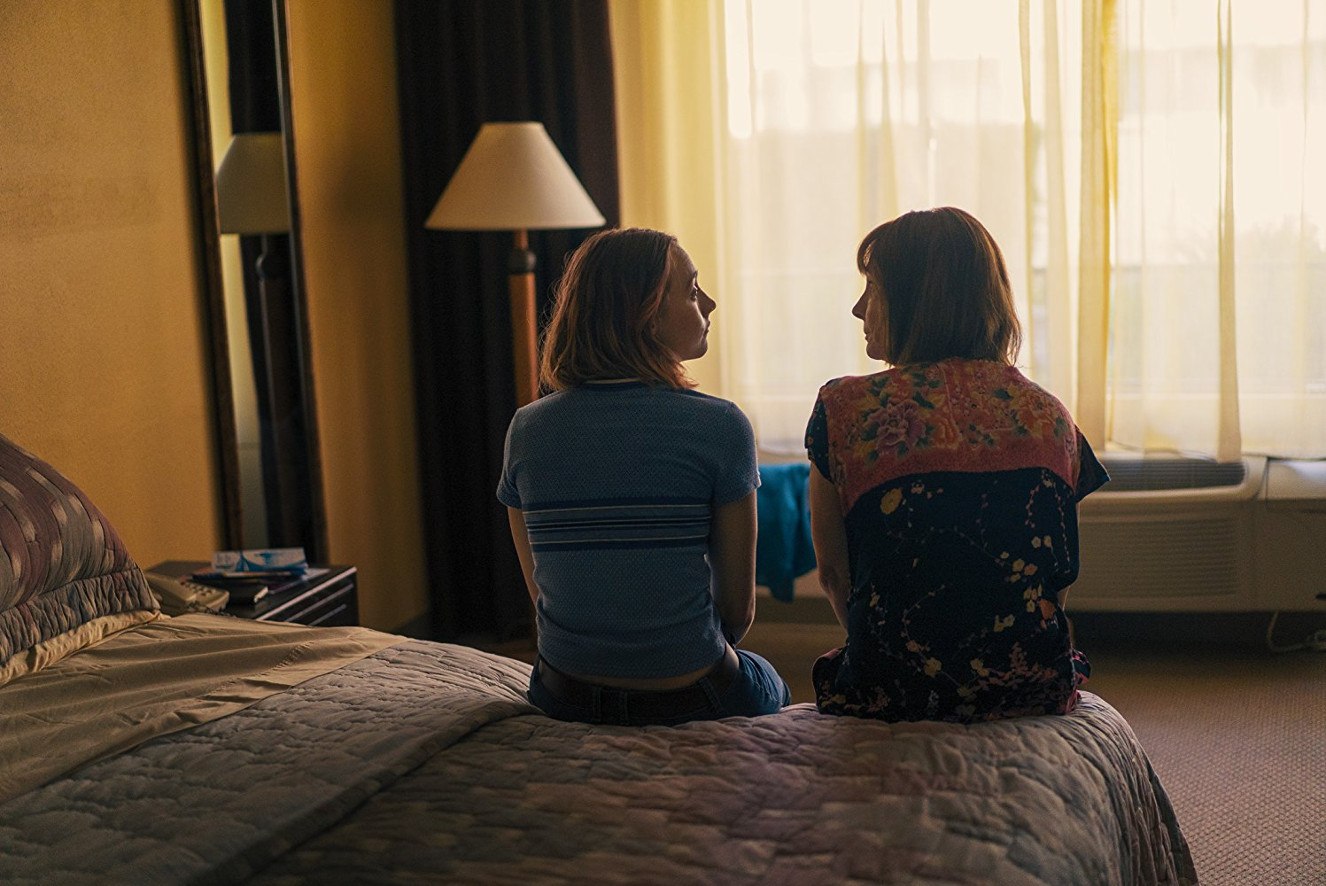 So the whole script is this collection of wonderful moments, these misinterpretations and glancing blows. The ways we decide to hurt those who love us and those who we love hurt us. Yet in the middle of it all is the sublime, these moments of connection where whatever it all is drops away and the characters finally see each other. I guess part of it is teenage posturing, I never got the chance to do any myself, was always too nervous to ever take leave of myself, too nervous to reinvent myself.

I realised, I guess, later on that I could just choose to be a confident person, that I could play pretend at an exhausting evening of being a version of myself for everyone else. But I was scuppered, I was too old I had already became a compassionate mindful person. I never got to be rebellious or iconoclastic, I have always been stuck in me. Sure, I’ve probably be a shit in my time but I never got to enjoy it.

That’s as good a version to like a flick as any isn’t it? Seeing a version of yourself that you never got the chance to be. Someone self-possessed and determined. Someone powerful and compassionate and whose active engagement with their flaws becomes so much of their character. Gerwig has been saying that the film is just about adjacent to something autobiographical and you can tell with the easiness that she approaches the cast.

They’re great, uniformly great. Is it the way they’re framed in Sam Levy’s camera that does it. His frames strike the characters even, rarely interested in dictating power or mood, it allows the actors to exist within these spaces, draws them together. So often the film will favour the two shot, cinematic closeness. Look at the production design, how Chris Jones reduces his sets down to allow the actors to shine.

The film ain’t anonymous though. Sacremento screams loud in this film but it is not a celebration. We hear the pains of inequality, our leads are poor and it is felt. All the petty childhood indignities of not being so well off in an affluent place. All the pain and pressure that can put on a child. I’ve always wanted to escape that and yet, what’s the point? I’ve always been reliant on all the help I can get. We all have so many debts that they become hard to sort.

It may be too much to expect Lady Bird to being this to bear but it sorta does. It’s all in love and the possibility of forgiveness, the wonderful transformative power of being emotionally available. I should more sometimes.

See, I’m writing this a couple days after the Oscars and the whole best director conversation got me thinking. Cos, what’s it there for? We got best picture for the best picture so it ain’t for that. All of the other rewards are for people doing their job really well, just nailing that one specific thing they’re supposed to do. But a directors work is outside of all that, it exists beyond what we see on the screen.

I got to thinking about this clip of Greta Gerwig directing Saoirse Ronan and Lucas Hedges on set. Coaching these actors, playing with them and encouraging them. I think about all the stories we’ve heard about Hollywood shitheels. Surely the best director has got to be a nice person? Got to create a nice set and get the best out of their contemporaries? No shade to Guillermo Del Toro buy the way, he seems lovely, I’m sure on set he’d be the same way.

I just so regularly feel so weak and somehow I walked out of my screening feeling whole.