It could be described as audacious. It’s certainly audacious to take eight Steven King novels and turn them into a ninety minute movie that bares almost no resemblance to the source material. It’s audacious to start a movie with a montage of children in this horrifying prison torture camp and then end the flick without resolving that dangling thread whatsoever. It’s audacious to make a movie where every single line of dialogue is a character explaining something, only never for the questions that the audience is asking.

It’s audacious that this crap was put out into cinemas.

See, in the opening when it says ‘Only the mind of a child can destroy the tower.’ you might be thinking we getting on some Neverending Story type shit. The prophesy, the child, it all comes together in some unexpected way. Nope, the bad guy is literally blending up the minds of children and hurling them at the dark tower. The Dark Tower itself stands at the centre of all universes, though we only see two, keeping evil at bay. Evil here seems to be red fog, inhabited by Dead Space lookin Necromorph style beasties. The bad dude wants them loose because, I dunno, he’s bad. Seems to have convinced a lot of people but don’t really articulate a coherent philosophy in the runtime.

He’s opposed by The Gunslinger, who is very adamant that while he used to be a Gunslinger he is no longer. It’s never quite explained who the Gunslingers were, or what they did, or why everyone loves them. They seem to be the only ones with guns, and for what it’s worth he shoots them damn good. I’m not too sure what it means though. Or what it means when the baddie stops his bullets midair with his sinister magics. And it’s always magics, with an s, maybe throw a k if there as well if you wanna go full magicks. 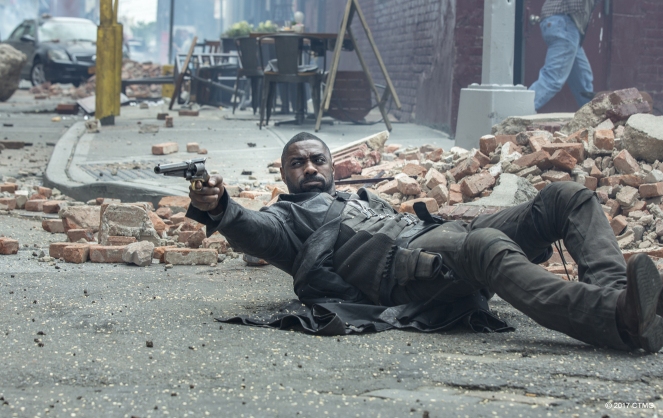 It’s an affectation that goes well in text, or maybe coming out of the mouth of some legendary Shakespearian actor. Whatever Matthew McConaughey’s mouth does with it is a disaster, just like all of his performance in this film. Maybe he’s miscast here, or mis-directed, he’s too charming. Even when he’s trying to portray a walking embodiment of evil who can literally command those around him to ‘stop breathing’ he’s smooth and suave and a little bit casual enough for it to feel like it’s 3am in a Vegas high roller’s bar and he’s swinging in celebrating breaking even.

It’s a noxious performance, like in Gold earlier this year he was pushing the bounds of likeability so far his central character was borderline disgusting to watch. Here it’s hard to even to lend him an identity, it’s like there’s a hole where his character should be. Thankfully he’s cast across from an engaging presence, Idris Elba is the Gunslinger which would be an awesome kickass role for anybody. The morass of writers who are attached to this thing have made playing someone called The Gunslinger an utterly thankless task.

Dude’s an exposition machine. He don’t get nothing fun to do whatsoever for the most of this, explaining mostly, scowling and explaining. It’s not until the final five minutes that he actually gets to have his fun in one of the joints few functional action scenes, and he still manages to come out of it shiny. Not entirely, he’ll always have The Dark Tower on his resume, but at least his face looks good in it.

You may be thinking then that this Gunslinger fellow will be the main character. Nope. It’s a shitty, unremarkable white boy who just happens to be having the most fearful dreams. Would you believe it but these dreams actually happen to be real? And they might be the key to saving the world? Wow, what an original premise you have dreamt up co-screenwriters Akiva Goldsman, Jeff Pinkner, Anders Thomas Jensen and Nikolaj Arcel. It really took all four of you? Is that why no single woman in this film gets more than five lines of dialogue? I see.

He’s like Harry Potter except somehow more uninteresting. A plot device dressed up as a leading man. McConaughey wants him, Elba needs him, he don’t even just wanna go home or anything. Kid just along for the ride. He has no real will, no real want and far too much of the movie is taken up with the film’s attachment to this protagonist we all tired of by now. What?

It’s like the film tries to charm us with its glaring ubsubtlety. Kid has a step dad, and it’s not enough for the film to make him a dickhead, this man has to be a literal monster. If you wanna put onscreen a man who very obviously is emotionally and physically abusing his girlfriend and stepson: do it better than this. Don’t have him turn up, a cartoon character with a raised fist, and then just punt him outta the plot as soon as his presence is remotely inconvenient. It is a literal erasal of his power over his victims and denies them any sorta chance to play their own role in the narrative of abuse.

Would that it were the only time. The film plays about with these signposts and billboards instead of creating actual characters, every five minutes more turn up. Not just characters, there’s places and objects and happenings scattered all throughout this joint that exist to fill the place of where some nuanced material might be.

Even then it’s boring. I’m trying to think because you can fairly map the major beats of this movie onto Fellowship of the Ring. Imagine if that film ended at the Battle with the Ringwraiths at Weathertop. It’d be a pretty sucky film. Not imagine it took ninety minutes to get there.

The Dark Tower is currently screening in UK cinemas

One thought on “The Dark Tower Review – Long live the King”