There probably exists a time in the future when there’ll be a critical reappraisal of Wonder Woman. People will be asking, ‘Was that it? People got so excited over that?’ There’ll probably be some sort of vindication for all the shitty complainy men who so frequently whine over this sort of thing. We’ll forget that there’s power to be had in coming first.

But fuck that. Wonder Woman is dope. And sure it’s a little unconvincing at times, and the villain’s a bit shit (as usual), and there’s this pointless framing narrative that only exists to remind you that the Justice League exists; but now there’s a movie that decides it has the time to make Wonder Woman herself an actual character, Diana proves herself to be like the best person. A strong, resourceful, decent, empathetic badass.

See, the film opens on the mythical island of the Amazons, Themyscira, where Diana (Gal Godot) formed from clay by Queen Hyppolyta (Connie Nielsen) and breathed into life by Zeus chafes against the restrictions put upon her as demigod princess, she wants to go out into the world, improve the lives of mankind as the Amazons were created by the Gods to do. It’s like every single one of these origin story movies, but here’s the thing. The lead is a woman, the overbearing parent is a woman, the renegade relative who trains them in the ways of combat is also a woman.

There ain’t a dude face in the first 15 maybe 20 minutes of this film and then when they do turn up the dames go about and just about kill them all. Sweet. There ain’t nothing I don’t like about this movie. Then Chris Pine shows up, tells them about the Great War and that he must return to British high command with some intelligence regarding a new German superweapon and it’s off to the races.

The rest of the film plays like a sorta action-spy thriller-comedy about this wacky mismatched pair and their quest to bring World War One to an end, also it’s possible that Aries (the god of war) might be in the mix somewhere so they’d best deal with that as well. Oh, and there’s the band of misfit soldiers who they pay mercenary money to tag along and help them out. It’s all the most obvious big picture stuff you could possibly imagine, but the hundred year time gap from the rest of the mess that makes up the DCEU allows it an identity where it can shine in the details.

Like in that first big battle sequence as the dust is settling a character turns out to have been killed, then another woman, clearly coded as their partner, moves in to weep over their body. Or like, how Wonder Woman uses the shitty masculinity of the generals in British high command against them. There’s also that scene from the trailer in which she uses her ball gown to disguise the fact she’s carrying her big fuck off sword. 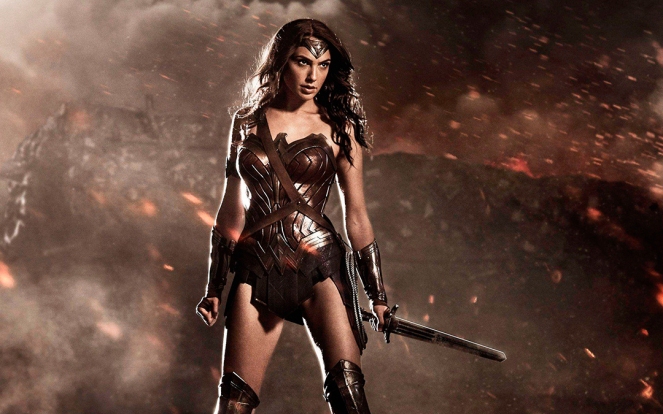 If Warner have had no interest in making their Superman a protector it seems that role is being ably picked up by Diana. The sword itself, big and shiny as it is don’t really get much play (your beginners guide to semiotics say the sword is a penis, which is why despite its prominence it’s a weapon never really wielded) it’s the whip which is the star of her arsenal which one, nice, and two, really pretty to see used in these action sequences. Also the classic bullet deflecting bracers get a lot of screentime, again largely in the context of defending. Her powers are explicitly ones which declaw, disempower and emasculate her enemies, it’s a sweet little thing.

Not to say it all great though. The film still falls into the trap of making evil people physically deformed, the bad doctor (Elena Anaya) wears this porcelain phantom of the opera mask, which is all about evil ugliness attempting to create a simulacrum of virtuous beauty. Of course in the end it’s the attractive heroes who have to be the final arbiters of her guilt. When you’ve got someone looking like Gal Gadot as the lead it’s hard for it not to feel like that. Also the film has a Native American character (Eugene Brave Rock) who happily admits that his allegiance belongs to whoever pays him, regardless of their morals, gotta be that dude right?

Director Patty Jenkins is clearly enjoying herself here. From the island to the trenches, she creates these terrifically realised spaces, and she’s a real fan of hopping the camera up into a birds eye view, I’m sure there’s some meaning to this given how much the script relies on examining notions of deistic judgement contrasted with the more humanist philosophy of our leads, but I’m more struck at what pretty pictures Matthew Jensen has shot. I’m still of the opinion that the electric cello on the main theme is a mistake, it’s one I can live with though.

Wonder Woman, it’s not the best, but almost a decade into this current superhero cycle it’s the fucking first. And fuck you if you don’t think that matters.