The posters for Sleepless ask us not to ‘judge a cop by his cover.’ Can we judge him for the fact that he seems to be a total asshole instead?

In the opening scene of the flick Jamie Foxx and his partner steal several million dollars’ worth of cocaine from some gangsters in an armed van. The next morning they report to the scene as police officers, they hope they can lead the case in the wrong direction and wait for the heat to die down before moving the product. In the heat of the moment during the heist Foxx lost his mask, while he’s driving his kid to their football game, some people working for the man he stole from recognise him. If he can get it to the deal on time, they say, the kid can go free.

Baran Bo Odar’s Sleepless is a Vegas film, it seems to want to remind the audience of that a lot. We’re keeping getting these swooping helicopter shots of the strip, as if we might have forgotten. Probably because the majority of the flick takes place in Stanley Rubino’s (Dermot Mulroney) casino, where the garbage bag containing the bales bounces like a pinball from one major player to another. Between Foxx; Michelle Monaghan and David Harbour, two Internal Affairs officers investigating his misconduct; and the criminals on both sides of the drug deal whose patience with each other wears thinner as time goes on.

There’s like the standard amount of double crossing and double-double crossing and drama that generally comes out of these sorts of things, none of its particularly poorly acted or egregiously paced, it would just be so nice if there were a little levity to the proceedings. Our introduction to Jennifer Bryant, the IA hound comes with her dressing down a therapist who’s attempting to council her on a recent injury that made her take time off work. ‘Stop getting in the way of me doing my job.’ Is basically what she says, I might be paraphrasing but the screenplay is so sparse with its dialogue I might as well not be.

The flick seems the same way. Away with empathy and understanding, they’re at odds with the story they’re telling: one of these asshole people all fighting each other over a sack of powder. There’s some smart decisions made in that regard, like how there’s not really any civilian casualties, if there were we might start to feel conflicted. I mean, like Foxx and Monaghan are more likeable than the rest, largely due to their natural advantage of being two damn charming performers.

Their charm is really all they need, because for all the neon drenched underground clubs (seriously there’s like three different dancefloors within a five minute walk of each other) it’s not really a film interested in being cool. Not in the same way that something like Free Fire felt anyway. It’s happy just to be another iteration of the single-location B-action formula.

And on that level it’s perfectly fine. It’s one stumbling point coming right towards the end when the film just randomly decides it needs to imperil Foxx’s character’s wife for the last ten minutes of action. They’re of course separated, and she’s presented pretty consistently as a nag (his apartment, of course, has a wall on it with a map of the city’s underground gang leaders, so dedicated) so when she decides for the first time to take decisive action it’s just fated to end with her cowering before a drug lord’s machine gun.

In another world this could maybe have been a John Wick but unfortunately as it stands the pedigree just ain’t there. Odar seems a competent director by all means, Who Am I shows he can be slick behind the camera, even if he shouldn’t be writing. But slick itself isn’t enough, just like no amount of gel can properly conceal a balding scalp. There’s not enough in Andrea Berloff’s screenplay (adapted from the French flick Sleepless Night) or Jeff Imada’s stunt and fight choreography to add the volume that this film needs. So, like the old man’s greasy head, all the patches show. 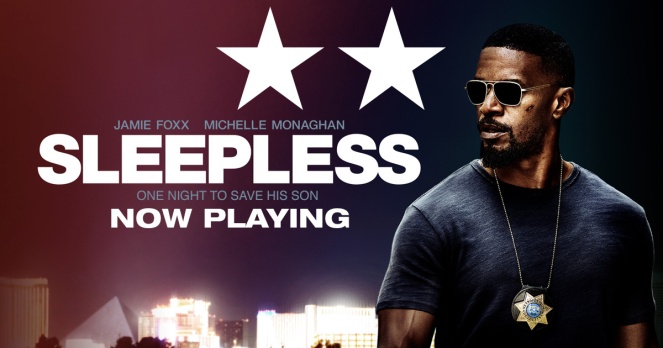 Image courtesy of Entertainment One

One thought on “Sleepless: The double double”