In a series of stark scenes Katell Quillévéré destroys one life and saves another. When a teenager sustains unrecoverable brain damage in an early morning car accident, the organs within his stable body take on an urgency of their own. The medical professionals know the brain is dead long before they receive the scans detailing the internal haemorrhaging. They maintain the still breathing corpse long enough for his parents to say goodbye. They then have to ask their permission to extract the healthy tissues for donation, the seventeen year old never had a chance to make his intentions clear.

Quillévéré steers the story between the boy’s parents and the woman who is eventually to receive his heart, we spend what seems like the majority of the time though with the medical staff. They aren’t made to look particularly heroic, they mostly in fact seem overwhelmingly tired at the whole affair, trying to find the most appropriate ways to guide their wards through the most destabilising periods of their lives. Even though they have the ability to take a heart out of a chest and insert it into another they, try to grapple with what all this means, or they just ignore it if they feel that the wiser option.

The film opens on Simon’s (Gabin Verdet) last morning. Leaving his girlfriend’s house by her bedroom window he cycles through the city to meet up with his friends, the camera pursues him, it captures within him something vital. Accompanied by a partner on a skateboard the picture dances with them, kinetic and wild. They take off in a battered van to the sea, as they ride the morning surf they find a piece of tranquillity, a moment of peace. At one point after being ripped under the waves we linger there for a while as it seems like the sky crashes down on us. Time seems to slow, and slow and slow, until the moment on the road back to town when it stops.

It’s spellbinding filmmaking, opening a curtain into this child’s life before it removes him. The camera never gets so lively again, the faces never get so smiley. It helps that master composer Alexandre Desplat scored the film, so his exquisite work accompanies most of that prologue. We hear the crash and instead of showing us the wreck, we get the supervising medical practitioner singing to pop-rock in his car on the way to the hospital. It feels like it captures something that was missing from the Dardenne brothers The Unknown Girl last year. Their depiction of healthcare seemed like pure suffering, and the heroine’s failure to save someone, not even a patient, was an eternal wellspring of pain.

I actually wanted to be a doctor when I was young. I’m not too sure for how long, or how much it was even my idea most of the time, seemed like the respectable thing to do, everyone wanted a doctor in the family. For my own part I came to realise that the people I watched on Scrubs were actors rather than doctors. Knowing some young doctors now, and following a couple more over the internet, I realise there ain’t too many realistic depictions of doctors out there.

There was a time I was doing work experience on a geriatric ward. There was one day where I arrived at the same time as this doctor intern, he was starting, I think, an eighteen hour shift. He announced that it was going to a real boring day, nobody’s getting worse so we just keep doing what we’ve been doing, it was a pretty chill day. Another day a patient died and I was there when they pronounced him dead, neither is all of a doctor’s job, it’s just that it has to contain both.

There’s the scene where, in an office somewhere someone marks up a board with new organs that need suitable bodies and a team sets to work finding them. It’s like Soderbergh’s Contagion: except where that film manages to be about the muted clinicality of public health, this is bursting at the seams with its care.

To that end the film is super generous with the time it affords Emmanuelle Seigner and Kool Shen, in playing the child’s parents. It does not feel exploitative of their grief and yet, as they make it into the hospital and find the pity instead of commiseration and slowly start to realise it is all so much worse than expected their descent is impeccable. They radiate so much that the camera departs from them, Tahar Rahim and Bouli Lanners play the doctors in place to manage them through their grief, and we can see the pain reflected in their faces.

At the other end of the operation lies Anne Dorval’s Clair, a woman managing her demise with more tact than her illness probably affords her. At the theatre for a recital she asks the usher to carry her up the stairs. She coaches her sons into their independence, even if realising they might not manage it on their own. She seems like when the possibility of salvation arises she may certainly be like to reject it. She’s also got a sly romance going on with what seems like her ex-girl, which is as sweet and tender as anything else.

In France they have universal healthcare, you know, something that is being destroyed here by our bullshit government. The dying form it takes is always going to stay close in me. Hospitals have made their marks on my body, outside and inside, I can track my years by the scars. Heal the Living feels like it knows that world, knows the people who exist within it. It struck me super super hard.

Heal the Living is currently screening in limited release. 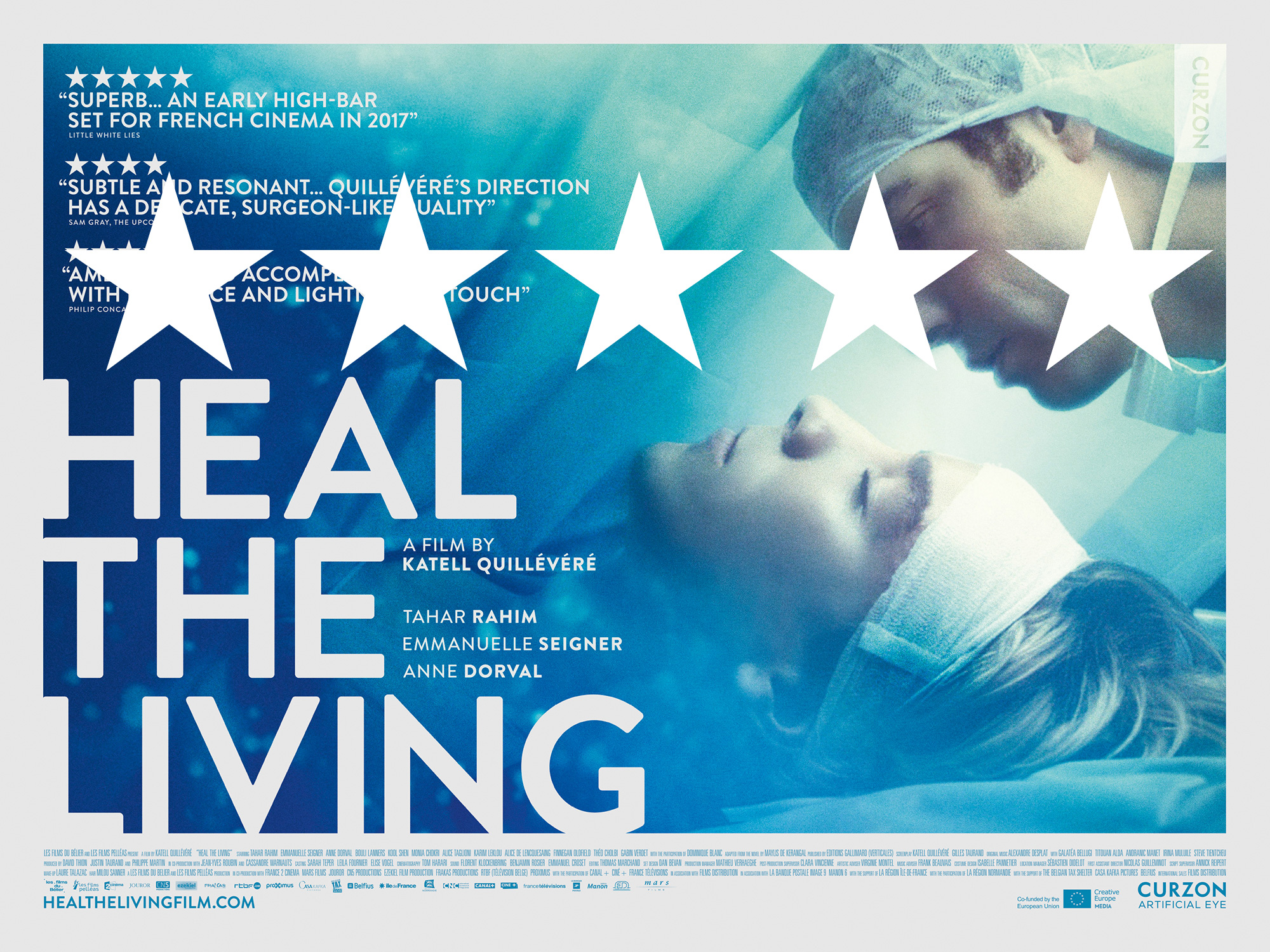 One response to “Heal The Living: Universal health”