There’s this amazing bit in the story of Gertrude Bell when, on one of her Middle Eastern expeditions she runs into a young man working as an apprentice at an archaeological site. And she tells him, ‘Hey dude, I know you’re just starting out, but you’re digging all shitty. We’re trying to preserve history here, not destroy it.’ The man, Lawrence, then describes in his journal how he totally schools this dame, then asks her a rapid series of questions to determine if she was worth talking to.

Yeah, this woman, the one who would go on to shape the political landscape of the middle east, who witnessed the Armenian genocides, and oversaw the creation of Iraq, who had by this point published multiple books about the area, was mansplained to and gatekept by a teenage Lawrence of Arabia.

Of course it’s his name we remember.

So it’s a good thing that Letters From Baghdad has come out, cos now we have a potted history of this boss ass babe in her own words, as read by Tilda Swinton with a certain cynical weariness. Also the writings of those around her, portrayed by other actors in these charming, if sometimes wonky, faux interview bits. I’m happy to say that their T. E. Lawrence comes across as a right little posh boy.

A huge draw is the photography though, we don’t have much of our lead on film, we have the family photographs, the state photographs, and the ones she took on her expeditions which show she had quite the eye sometimes. But she remains absent from the moving picture. So the filmmakers here Sabine Krayenbühl and Zeva Oelbaum have found as much contemporaneous footage as possible.

The BFI here releases silent collection every so often, we had a country life one come earlier this year. There’s always praise doled out at the capability of these early amateur filmmakers to capture life. Dear God some of the footage in this film is just extra, crackling fuzzing images of grand archaeological digs and camel trains, and docks and river workers and all the life of the Middle East pre World War One, this modernising place caught in a snapshot of imperial modernisation. All narrated by a woman who ain’t too sure of the changes she’s instrumental in making.

I ain’t really got too much to say other than that, it’s a real solid documentary that explores an interesting story about an interesting person at an interesting time and place. I’m sure it sounds like damning with faint praise, and maybe it is if it don’t sound interesting to you. There’s nothing for me to compel you to it despite yourself, but if you like the idea, you’ll probably like the film.

Letters From Baghdad is currently playing in UK cinemas 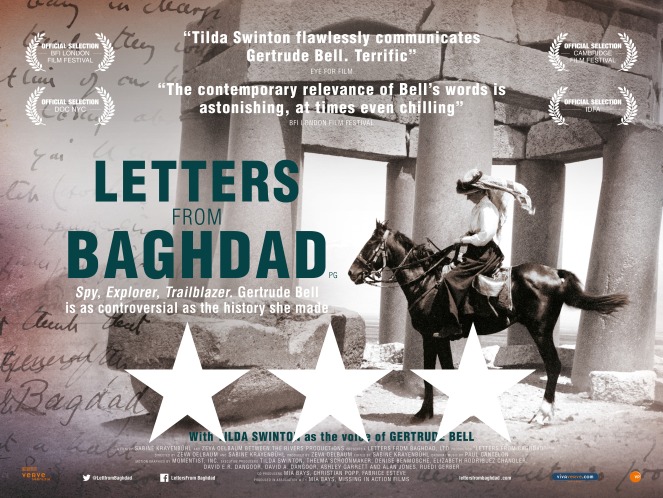