Nine episodes in and it seems like things have finally settled down into a good rhythm, although I’m assured by reputation that it’ll be shaken up before too long. With the arrival of Asuka and Kaji in episode eight it feels like the main cast are finally all in place. The show’s using its episodic structure to flesh out how these characters relate to each other, and sketch out some of the supporting cast in greater detail.

I think this is the first consecutive run of episodes that I’ve covered wherein each is dedicated to the dispatch of its own individual Angel. Nine sees Asuka and Shinji team up to battle one with the ability to split into two bodies when threatened. Ten has the two drop into a volcano to attempt to end one before it grows out of its pupal stage. Eleven and twelve are the first that see all three take to their EVAs simultaneously, first to defeat a spidery looking acid thing, and secondly one attempting to divebomb Tokyo-3 from orbit.

If Shinji’s sitting at the centre of this show, these episodes are all about how he relates to the women around him. Asuka’s impetuousness finds them in a bind as she attacks the Angel in episode eight without support. They’re given a week’s reprieve to stop being at each other’s throats and learn how to choreograph their attacks for round two. They seem unable to quite get it until she wanders unconsciously into his room, collapses on his bed, and half asleep starts calling for her mother.

Shinji doesn’t know how to be around women, I mean, he’s bad around everyone but with women it’s worse. I guess his mother died, and his father was always absent, and now he’s being forced into the position of ‘becoming a man’ without any positive figures to model of what that would even be. Kaji’s still around, basically a father figure to Asuka and I’m not sure if the show finds his weird sexual assault of his coworkers funny. There’s a leering, ‘but they’re into it’ mentality which is like pervasive and gross.

Yet, it’s a mentality that only seems to exist where the adults are concerned. All our young leads react with horror to the thought of being physically objectified, and the end result of expressing sexuality for Shinji is always shame or pain. Here, with Asuka in bed across from him, he accidentally hits fast forward on his tape player and the soundtrack is consumed by skipping audio and static. When he realises she’s arrived as something other than an object of desire the noise clicks off, and we cut to see him now curled up in a corner unable to be close to her.

His sexuality seems a source of constant betrayal. But it is his desire for physical closeness that puts him in these positions. The episode ends on a majestic sequence that showcases the culmination of their work. A frantic yet perfectly executed minute long battle that climaxes in a split frame of both of their EVAs acting as one, while superimposed on top images of their faces flicker and merge. Like it’s beautiful, and then in the aftermath the two robot bodies have fallen against each other in a compromising way and he’s back to being shouted at.

Episode ten is like about liquid in a way that feels inextricably tied to these teenage discomforts. With the rest of the school on a trip to Okinawa an early scene show our three pilots with the pool to themselves. Shinji tries to complete homework on a laptop off to the side while the camera, embodying his attention, tries not to be distracted by the girls’ swimming. For him it is a situation as perilous as the lava that Asuka’s going to be excruciatingly lowered into later in the episode.

I’ve noted before how interesting the Angle designs are, having seen more battles I wanna commend also the thought that goes into their construction too. If episode eight culminates in one minute of frantic, purposeful action — nine makes itself slow and measured. The EVA is hung suspended by cables in a seemingly endless expanse of magma, audio and visual range is low, the sequence is carried out against monotone, burning reds, as all movement is impeded by their physical surroundings. And always, the warnings of heat and pressure. The show has set up rules to make these moments of action punchy and brief, and here it sets them all aside to show us how it can manage tension too.

The episode ends at a hot springs near the volcano, Asuka and Misato ask Shinji to throw them the soap over the wall, they’d forgotten theirs. He stands for a while, alone, listening to these women he knows having fun, excluded from the intimacy that a spring offers its guests. Then he gets an erection and hides his body beneath the water in embarrassment, despite there being nobody else around. It keeps on betraying him like this.

Episode eleven sees the power go out in Tokyo-3 during an Angel attack and various cast members have to collaborate in struggling through a defunct NERV HQ in order to launch the EVAs before the city is lost. It’s notable maybe for being the first time we’ve seen Rin, Asuka, and Shinji be forced to act as a team with no outside guidance.

Asuka takes the lead, and naturally isn’t very good at it until learning that leadership is more than just telling people what to do. Although she is very good at that bit. Rin proves herself to be quietly resourceful, and I guess Shinji is just sorta there. It makes sense, we’ve seen his relationship with these two women develop, and for now Asuka feels intimidated by Rin, the first pilot, the one who isn’t intimidated by her, the one who has the commander’s approval.

I guess Shinji was never going to challenge her about these things. In her placid way, Rin sets Askua straight. They’re all children, they’re all being asked too much of, this is a stressful environment to be in. The understanding helps, and Rin knows her way around the slumbering base.

Elsewhere Ritsuko and Gendo team up to get the EVAs online in preparation for the pilots’ presumed arrival. We’ve seen him sweat before, it’s more like an affirmation, these two usually cut through political bullshit — they can take these matters into their hands if necessary. A few I think unnamed control room bodies get featured, realising what’s happening first and hurridly alerting the base when all their sensors are down.

Misato and Kaji are trapped in a lift the whole time, and he inappropriately flirts with her. So that’s something.

This is the closest that we’ve come to actually seeing NERV as a functioning organism. Outside of the tech that makes everything work it’s beating heart is still the people who work there, and when the chips are down, they can pull together to make things work. After the battle, on a hillside out of the city,  the three pilots look down and marvel at humanity’s resilience. They might as well be talking about their own.

Episode twelve begins with our first glimpse of Second Impact. The frame is burnt and raw, we see contextless images of apocalypse until we centre in on a man locking his wounded child away safely before he can finally die. Above him, towering golden wings sprout from the wasted Earth and extend far out into space. We see the sky marred by a red maelstrom and furious, seething energy blasting everything it touches. The pod the girl is locked in is swept out to sea, the camera focuses on her necklace and her wounded chest and cuts to Misato in the middle of her morning routine.

And you realise that she is that girl. The horror of Second Impact has been casually suggested, the fact that these folks are living amongst the ruins of a destroyed world. The schoolteacher who drones on about it in history lessons, the dramatisation in the cinema. We’ve experienced it as these children have, those who only grew up in the aftermath, those who knew no different. We do not comprehend it with the same eyes as those who saw.

My inability to remember 9/11 is one of those things that I think made me. I don’t know why I don’t, all my siblings do, at least something and quite clearly at that. It’s not there, I’ve tried, rewatched the news broadcasts, surely there must be some lingering horror of that day. We were sent home from school to our grandparents house, they were apparently crying all day and terrified. It’s not there.

But it’s dawn, and Misato’s staring at herself in the mirror and it’s clear that she wakes with this every single day. No wonder she drinks. She’s just been promoted to Major too now and has gotta deal with the extra responsibility that brings at work. It’s worth it, she admits, her father got her into this position — maybe she can make things better by just digging out from under it, and if that means destroying all the Angels, well, that’s what she’s gotta do.

We see why she gets Shinji now, they’ve both had shitty fathers who abandoned them, only to call back just before everything went to shit. Neither of them feels like they’re fully deserving of the position that they’ve inherited,  good or bad, it’s generally easier just to dissociate. She’s uncomfortable at the party organised for her promotion, he’s antsy at even getting praise for his performance.

Especially when Asuka reacts the way she does. So sure of herself. She doesn’t need the praise, to her mind she’s already earned it. When asked why she pilots her EVA she remarks that it’s the best way to show the world how talented she is. All of this comes easy to her.

Yet after they’ve saved the day, again, it’s Shinji — for the first time — that Gendo, his father, chooses to praise. He can only open and close his mouth in silence, later coming to the conclusion that it was the first praise he ever felt comfortable receiving, that maybe he remains a pilot because it’s his one remaining connection to his dad.

You sorta wanna scream at him that the relationship is transparently abusive. But he’s a kid, what effect would that really actually have? These two have been trapped into their ill fitting lives because of the poor decisions of their shitty parents and i get the sense that it’s not gonna end healthily for either of them. I care and all I can do is watch.

At least the series affords them moments like the ramen joint at the end here, where they can forget about the hurt and just enjoy spending some time with each other. They know Misato’s bank account is hurting, and Rin’s a vegetarian, and they can settle for something that will accommodate them all. It’s the one place that they’re able to, none of them know how not to push themselves to breaking.

I’m not too sure when the next update will come, I’m trying to fit this in around other things and the business of trying to live. I’m actually not in much of a rush, and am kinda liking taking this a bit slower. If you’re not here all the time follow my twitter, it has all the news. Neon Genesis: Evangelion is currently available to stream via Netflix. 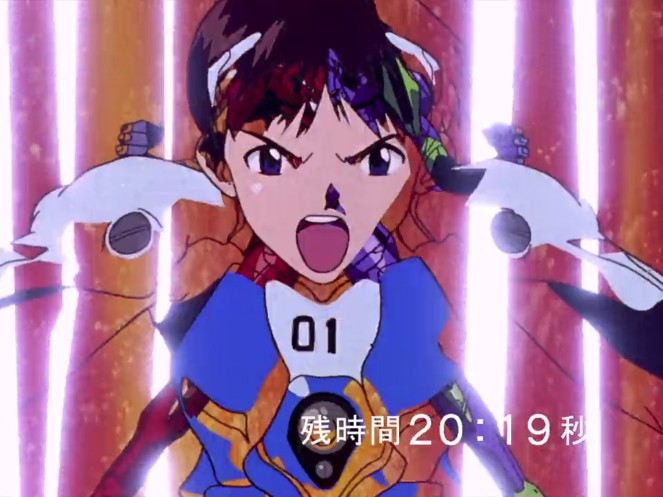