Can You Ever Forgive Me? Review — Necessary

The heroes of Can You Ever Forgive Me? are lonely and sad, trying to grapple with the fact that they’ve achieved far less with their lives than intended. I am twenty four, I shouldn’t be able to relate in the way I do. The title is not just a reference to a particularly witty bon mot Melissa McCarthy’s forger, Lee Israel, puts into the mouth of Dorothy Parker — it’s also a question I ask of a younger version of me late at night, for letting their prodigious (and possibly imagined) potential go to waste.

As the film starts we see her spinning out the tail end of her remaining support structures. Her publisher can’t and won’t get her an advance for the new book she’s failing to write, she’s canned from her day job, her building’s super is tiring of the mounting late rent. Some people have the capability to reinvent themselves in times of desperation. She’d say that she were too stubborn to, walking around the city scowling at a world that has personally wronged her, but in actuality she’s probably mostly just scared.

We can see it in her apartment, it’s a shithole. I’m guessing much like a lot of New York in the early nineties was that way, but her place is defined by her apathy and neglect. The way that Marielle Heller slowly unfolds her life’s degradation through the reveal of these rooms is perfection. When we first arrive there smoky blue light drifts in through the blinds, her bed cosily illuminated by the warm light of a very nice lamp. It is in later scenes as the camera drifts through the cluttered kitchen counters, the stained couch, the garbage everywhere — that we start to understand some of this woman’s plight.

It strikes wonderfully against McCarthy’s performance as a woman who refuses to be looked upon with pitying eyes. Her Israel is a quick witted, funny character and it’s so painful to watch her use those talents to drive everyone else away. As a movie star we love her as the cynic, she’s so good at cutting her villains down to size. Her casting is fantastic because she’s doing the exact same thing here — only the villain of her life is herself. It makes sense that, for her sanity, she’d ignite a friendship with someone even more desperate than herself.

Richard E. Grant plays Jack Hock, a homeless drug dealer who has survived on the cold streets of New York for most of his life on little more than his wits. We are told that they met at some point earlier in life at a literary party, but he too has been laid low by time. Like Lee, when asked if he regrets anything he issues a flat denial.

It is important that both of our leads are gay, this story takes place in 1991 and the spectre of the AIDS crisis looms large over proceedings. When Hock jokes about having ‘fucked his way across the city’ the weight of loss settles upon everything. The two of them both get strained, desperate attempts at romance, grasping for stability as their lives spiral out of control. How their need for connection manifests itself differently in relation to their own personally cultivated brand of self loathing.

After stumbling upon, and selling, some personal signed letters from Fanny Brice while researching her next project; Lee is introduced to the lucrative world of collectable literary artefacts. And, in order to make ends meet, leverages her one marketable skill in a new profession. Forgery. Inventing correspondence from the famous for the pleasure of those with the money and inclination to buy letters not meant for them. It’s an alluring tale, the closest it ever feels to criminal at the start is the tracing of Noel Coward’s signature, it’s for the most part pure swindle.

These people are dead, the content — an apology for a drunken night, a recollection of a evening at the theatre — is frivolous. The booksellers who buy these things are elitist and pretentious, we never see those to whom they’re selling the documents but I’ve a feeling that even if we did I’d not have too much sympathy. We enjoy seeing this bruised woman gain confidence in a field she has a true talent for, as she’s able to patch up some of her life’s most grievous wounds. Yet the weight of criminality sits uncomfortably upon her.

Under suspicion, she ropes her last remaining friend into the scheme and is dismayed to find that — outside of the actual forging of the works — the career criminal is better at it than she ever was. Usually when cinematic friendships start to sour, the film does so with them, becoming caustic and unpleasant. Heller though, continuously foregrounds this pair’s need for each other. Not simply in their work, but as two people trying their best to hold each other back from the edge.

I realised recently, that in movies the steam comes up from the sewers because it’s cold outside. I’m not sure why but forever my stupid brain decided that it must be because it was hot. I don’t think the realisation has helped me understand anything better, but seeing it makes me feel something now. This movie presents a perpetual wintry malaise in its sombre grey tones. In one scene it’s snowing and our leads are inside someplace comforting and warm. It understands the vulnerability that comes with exposing yourself to the world.

I struggle a lot with the happiness question. Sometimes it all does seem very hopeless, it’s all one can do to keep going. There are some people who are just ill suited to the world, manoeuvring through it gets to be a struggle eventually. I’ve sorta given up on anything extraordinary being a result of me, the best I can imagine is what we see here. Two hopeless people who, for a brief while, managed to somehow make something work. The film chooses to present that circumstance as one of fleeting beauty. It is.

Can You Ever Forgive Me? is currently screening in UK cinemas. 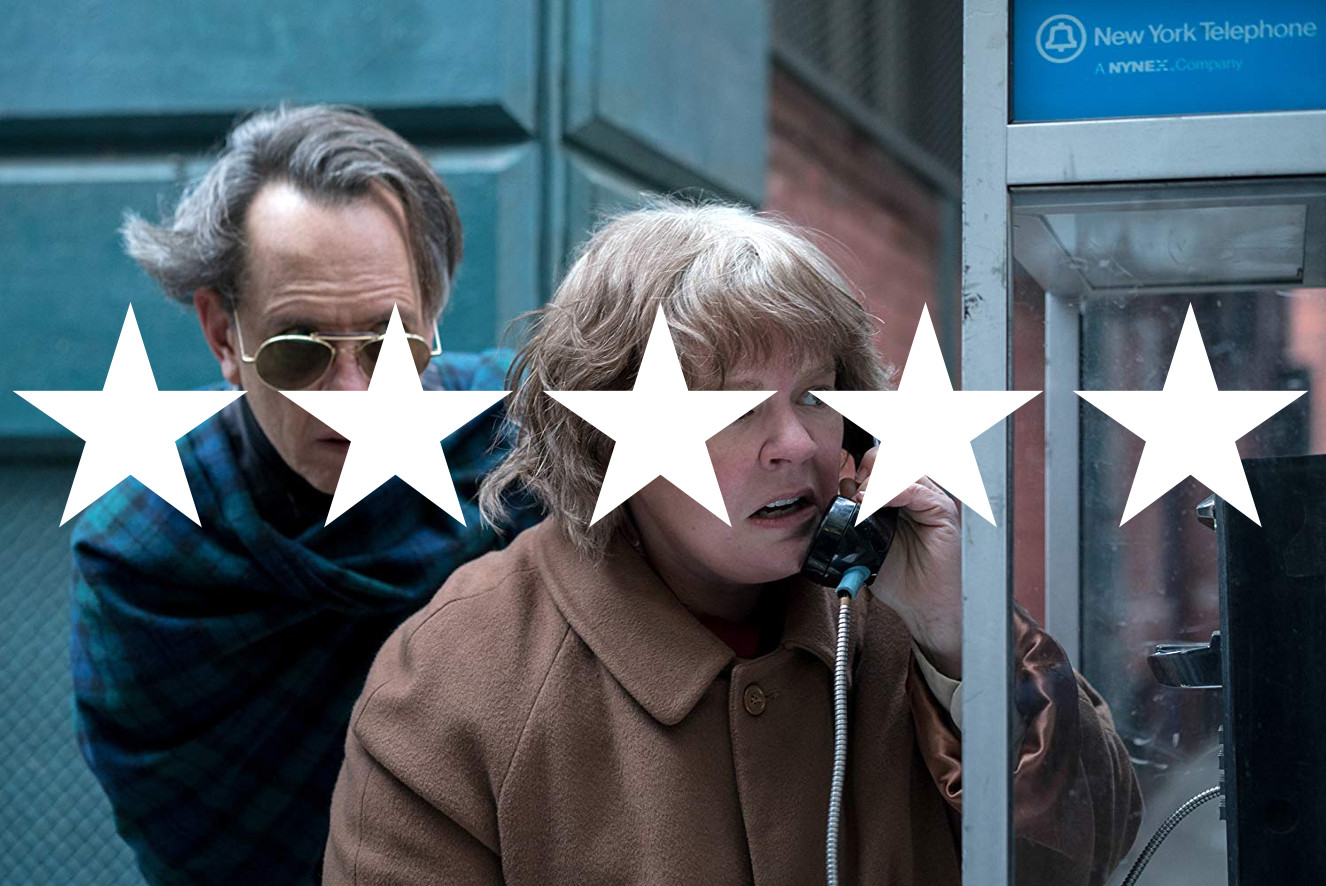