In basically the first scene of A Simple Favour Anna Kendrick’s character explains that the sequence of events leading up to her best friend’s disappearance happened on their kids’ school’s World Food Day. We then cut to a flashback, the banner in the classroom reads Ethnic Food Day. And so it becomes clear that, even when tasked with directing what on the outset appears to be a serious and sexy mystery thriller, his primary tendency is always going to lean towards comedy.

Sure, maybe that makes the film uneven. There’s a comedy sneaking bit through the offices of a ridiculous parody fashion house which whiplashes right into the discovery of a strange and vaguely threatening piece of evidence, only to bounce back to the character clumsily talking themselves out of the situation that they got themselves into. A series of jokes in the house about the alcoholic old lady resident rubs up against an accusation of multiple murder.

These things shouldn’t feel at home with each other. Not in how they’re presented, not in how pretty much exclusive the two tones are of each other. It kinda does though. Because Feig understands the reason why we love trash art in the first place. David Fincher, Tomas Alfredson, Tate Taylor, they decide to languish in how totally twisted and lurid these things are. Sex! Devastation! Powerful women emasculating their comically inferior partners! The horror, this must represent some sort of perversion of the natural order.

Nah, is Feig’s response. This is fun! It’s great and outlandish and these extensively laid murder revenge fantasies are ultimately really fulfilling in both their plotting and undoing. Why not make them fun to watch? Kendrick’s character (the investigator) is a single mum, looking after her adorable son while running a home tips vlog from her kitchen. Blake Lively (the woman who is to disappear) is a PR director in The City who saunters home in the mid-afternoon to her lovely modernist house for a wind-down martini.

They are the two opposite ends of the spectrum of mums who has it all. They also both dress incredibly dapper. Like, seriously, chalk this up as another joint I want all the costumes from, these people are so overdressed for just about every occasion. They bond over these martini sessions while their sons are on playdates, a singularly unlikely couple, eyed with suspicion by the other parents. Suddenly, and without notice, she vanishes. What happened? Who’s responsible? More importantly: who’s going to end up taking the blame?

The cops ain’t never going to figure this out. As we’ve learned time and again, they can’t be trusted. One woman must take it into her own hands, even if that means getting pretty close to the grieving husband. He’s played by Henry Golding by the way, continuing his streak of being irrepressibly charming. It’s a surprise then how the sex in this sexy thriller is directed.

Again, I’m thinking purely in terms of what we’ve seen before of sex in this genre. It’s almost always both lurid and unpleasant at the same time, a mingling of pleasure and pain. There’s always gotta be the hint of something sinful about it, something complicated. This film loves sex. As far as it is concerned sex is great! Even that naughty sex you maybe shouldn’t be having, enjoy it girl. You only live once after all. It’s this wonderfully and engagingly positive way of interpreting these events, complete in the understanding that they were laid out to entertain us after all.

Even the gruesome shit is laid out with a light touch the camera will often be pulled way back, observing the more chilling events with a resolve born of distance. I don’t think the film ever wants us to hate any of these characters, it will build up to a point where all the cards are laid on the table and we’re waiting to see where the allegiances eventually fall. In that moment I realised that I’d be pretty happy however it shook out. These don’t seem like bad people, they seem like chill crime friends.

I get that might not be particularly appealing to many. I’m sure nobody hopes their interesting psychological thriller amounts to goofy fun, but underneath the serious and gritty exterior they’re all super engaged in giving to a good time. The biggest crime that this movie makes is not being an out and out parody. It’d be easy probably, there’s gotta be some spec scripts floating around that amount to that. I’d bet that they are bad though, they don’t have the bones that this film does, upon which is hung the mixed up, half deconstructionist sensibility that only this singular dude could even have thought to bring.

Not essential by any means, but I’m betting that this will get a lot of television play. Even if you’re just solely paying attention to see Lively be so damn extra in all those bomb power suits.

A Simple Favour is currently screening in UK cinemas. 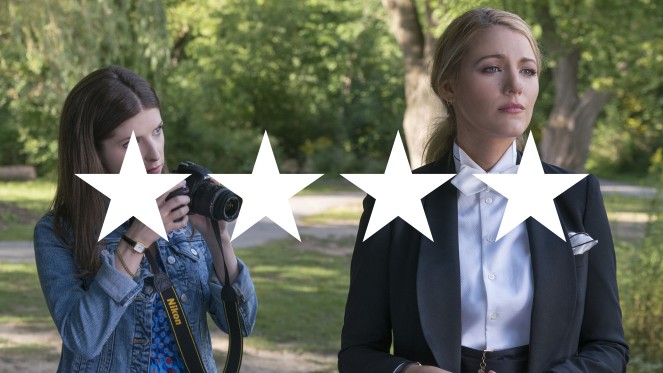