Now I haven’t seen any of Arnaud Desplechin’s other films. Maybe I should have. Maybe it would have prepared me a little better, the trailer certainly did an inefficient job of that. I thought it would be one of those French flicks that one could comfortably nap through, man on holiday with his partner at the sea when out of nowhere his long lost and presumed dead wife appears to start causing drama. You know, a classic romantic drama, probably elevated by the presence of Marion Cotillard, Charlotte Gainsbourg and Mathieu Amalric as the trio who the action revolves around.

I didn’t expect the film to start with an elaborate spy film parody. It’s revealed that this is the screenplay that is torturing our hero, an international intrigue thriller based sorta loosely off the life of his brother. He is also plagued by nightmares so bad they are driving him to insomnia. He retreats to the beach with his partner pretty early on. I’d estimate that we leave this location before the first hour of the film’s two and a quarter are up.

Gainsbourg’s Sylvia heads up a mountainside to study the stars, she’s an astronomer and the telescope time was already booked. Cotillard’s Carlotta sets about reintegrating herself to the life she abandoned years ago, particularly in regards to the father who accepted her death ten years ago. Amalric’s titular Ismaël sets about the production of the film which only gets more tortured and nightmarish as time goes on.

It doesn’t fit any sort of well defined mould. With its aggressive maximalist seems to most closely echo Charlie Kaufman’s Synecdoche, New York. An ambitious artist, the slow unravelling as the art seems to more aggressively intrude upon reality until both get so inexorably tangled in the mind that the progression of the creative pursuit becomes as constant as time itself. Destroying the creator in the process

It’s probably a basic and superficial read, because Ismaël’s Ghosts concerns so much of its time with the women who are alienated from this self-destructive, masculine view of authorship. Those who both in their own way find the need to flee from the stifling presence of the self important creators. Even within the movie within the movie, and then its fictionalised and confused production process, we have a young actress who plays the spy’s girlfriend. Her life is equally consumed in the participation, we start to lose her reality.

Whereas the spy himself, and the brother that he is based on, both played by the great Louis Garrel, are allowed to find individuality despite their only appearances being mediated through these mediatised forms. I ain’t entirely sure what I’m getting at here, if the film is confused or if I am. I know that I entered the space with the wrong framework.

Perhaps, like Paul Verhoeven’s most recent joint, Elle, the satire spreads out to the state of French filmmaking. The relationship shit that we get is all so deathly dramatic. The characters cannot find repression, every moment that they live in is an explosion of feeling as they scream and weep and celebrate and fuck. Contrasted with the overblown bond-parody spy-thriller that is ridiculous and convoluted.

After Ismaël stops turning up to set at some point during the film he arranges two classical portraits in his attic and makes a crazy wall between them with the string and everything. He’s rambling to his concerned producer, ‘People think that this art was produced by a singular culture, but look at the difference in perspective! If we are able to unite the two then we’ll finally be able to achieve peace.’ It’s another idea, no clue if it’s getting close to anywhere right.

There’s something impenetrable in the film’s scope. There’s a film festival scene with a long monologue about the politics and ethics of film which I was just not in the space to even follow properly in the subtitles. Apparently there’s a longer cut out there somewhere, one that more coherently ties together all of the pieces.

I’m not sure I wanna see it though. There’s something charming about its confusion and aimlessness, the way it circles around the edges of its arguments without ever fully filling in that resolution. It’s nice, and somewhat fitting perhaps because we’re never going to be able to once and for all ‘solve’ art. The least we can do is afford to let it spiral out into something expansive and confusing.

Hopefully it just doesn’t overwhelm us in the process. 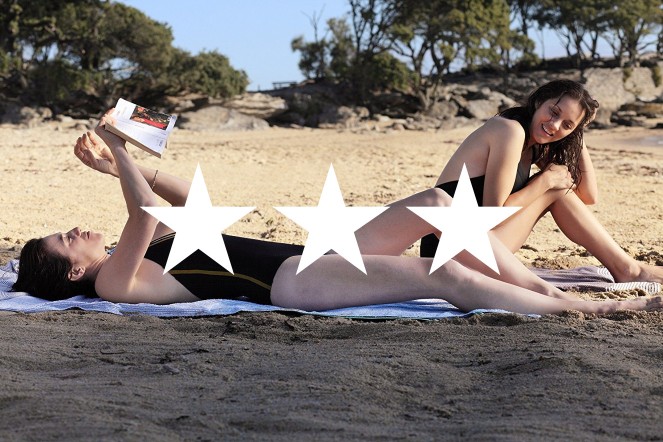