Johannes Roberts and Ernest Riera are men. You can tell this by their names. And also by the dialogue they give their two leads in this film. Whatever tension and thrills could have been generated by the later sequences, which I am excited to describe with such glowing terms as ‘capable’ and ‘functional’, are thoroughly skewered by the not even ten minutes spent above water at the lead.

If you’re wondering whether a film could be produced without a single woman reading the script before it started shooting, you have your answer. Yes. Claire Holt and Mandy Moore play sisters Kate and Lisa holidaying in Mexico, an early tearful scene reveals that Lisa’s boyfriend recently broke up with her, she makes him sound like a total dickhead. Kate decides their best plan of action is to go about trying to win him back.

If you’re wondering whether a film could fail the Bechdel test without even putting the guy on screen, the answer is almost. If you count the shark as male then it totally does. I’d be tempted to call Johannes Roberts a misogynist filmmaker but I don’t seriously think he is. I think he just doesn’t understand people. At all. Or how to construct a film to welcome you into their lives.

Like I am seriously trying to impress upon you how garbage the opening of this movie is. It’s legitimately the worst, like crappy student film bad. Even Mark Silk’s cinematography, which underwater is beautiful, striking these images haunting and ethereal, is rendered completely inert on dry land. Overlit, poorly composed, restless and stunningly, stunningly pedestrian. 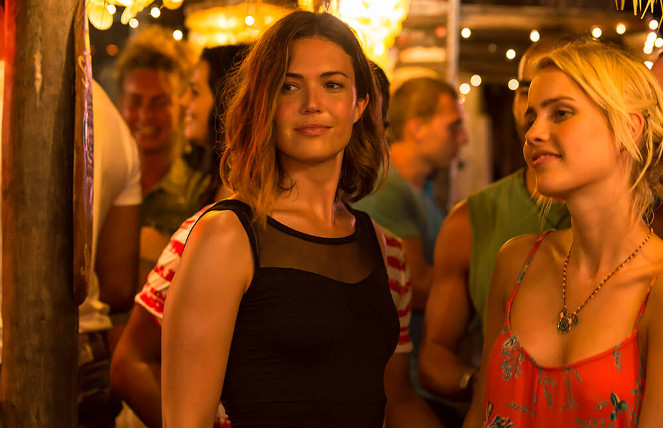 I’m sure these actors are tying their level best. With the exception of Matt Modine as the inexplicable white guy Mexican boat captain they’re all newcomers, but they don’t get nothing. The opening be so determined to take us through plot that the characters get select cuts from another movie where they just have to spout the exposition for the scenes we missed. Hey dude, get us in the water already, we don’t care, start the film on the ship like a competent fucking storyteller.

Course that’s too much to expect. See, one of the great things about filming underwater with those big, face-obscuring diving masks on is that it don’t matter what shit people be saying on set, you can dub in any dialogue you like afterwards. Roberts bravely fights this impulse. When the cable snaps and the diving cage drops to the reef floor in shark infested waters the plot starts to take a form recognisably dramatic but the dialogue don’t improve. I’d almost say it gets worse, but that sure ain’t possible, it’s just less inventively terrible.

Least in the water now they got problems to solve, challenges to face, hurdles to overcome. And to Roberts’ advantage they’re mostly physical ones, dude not an awful visual storyteller the moment he don’t have to worry about people. The joint been marketed pretty heavily as a shark flick, probably based on the surprise success of The Shallows last year, but it’s closest relative got to be Gravity.

Like, the best moments of 47 Meters ain’t the shark spooks (with the exception of one of them which is totally outlandish but also work work works) it’s the whole trying desperately to survive in this hostile, alien, unliveable environment. Like the moments when the oxygen is running low but they can’t be swimming faster for fear of the bends, or this bit where Lisa gets turned about over open water and isn’t sure which way is safety. It even got the same sound design (but worse) and a similar score composed by tomandandy (way too crunchy, I mean, I like crunchy but it all wrong).

With all the promise here there could really be moments that come to life, if someone had the taste and the restraint to cut the dialogue. It neverending though, the constant patter of someone so concerned that the audience won’t know what’s happening without being told. Repeatedly. Again and again. Constantly. Over and over. Without end. Y’all see how this be annoying.

I suppose there’s a lot to admire here, in an abstract sense. All the underwater work is incredibly accomplished, the production feels like an effortless work of minimalist creation. The way Silk plays with the blazing light of the lamps affixed to the cage can be beautiful and terrible. The actors and their doubles obviously put in the work where it come to the physical performance of these roles.

But it all in service to a film that is so completely effective in kneecapping itself within the first ten minutes that it impossible to take any of the work seriously. There this point early on where this American tourist in Mexico, on a dodgy boat tour, surrounded by strangers says, ‘I thought it was illegal to chum the waters.’

Really, did you now? Being that expert in Mexican tourist maritime law, and you just say that right to the face of the skeevy lecherous dude who’s chucking those fish heads right in? What on Earth do you expect? Oh wait, these characters don’t expect. They don’t anything. They say whatever stupid trash came into the scriptwriters’ heads without any regard for actually building, y’know, character.

I’d say it’s half a good film, and technically it is (my thoughts go out to all y’all who put in good solid work here) but the bad half stinks so awful it fucks up literally everything else committed to screen. Sorry.

47 Meters Down is currently screening in UK cinemas.