Y’all know going through this I was struggling to put the pieces together. Like, it seems almost impossible. Modern feminist filmmaker making a joint in which a bunch of women are all doting and fighting over this one man. What? Why? Feels like a misstep, I eventually got it though and once I did it became so much simpler.

So, this gonna be the second review where I start it by chatting about how attractive Colin Farrell is. I have an actual point this time though, I ain’t just being thirsty. Farrell’s onscreen persona has always been defined in relation to how absurdly hot he is, it’s like how around after Minority Report they just decided that he could keep his native accent and still be American. Dude do a fair American accent but it ain’t nowhere near as smoky and appealing as that Irish brogue.

In the original 1971 version of The Beguiled the wounded Northern soldier kept prisoner and patient in a Southern girl’s school is played by a youngish Clint Eastwood. Maybe he was like the 1970s version of hot but personally I don’t see it. Both of the actors in the role are early 40s when their film comes out. Farrell wears the age so much better. The genius of the casting here is that the man so crazy hot that we get the true sense of how it’s the inescapable force that just captures everything else in its orbit.

The character knows this, he know how bonus he totally is. So rather than Eastwood, the nature of whose pull on the women of the film goes basically unexamined, Sofia Coppola’s interpretation of the character is one whose handsomeness and charm is a weapon, very deliberately utilised by someone who just know how it be. That why the casting is so important. You telling this story where the main conflict be that all the grown women want to fuck a dude, it don’t work unless you have the world’s most fuckable dude in that role.

The appeal of the catfight to dudes comes from the fact that they see female desire as something unknowable. That something essential inside them has ignited this thing. The fight exists for their pleasure, as well as the victor. Their complicity in the events and ultimately their culpability are non-existent, cos there ain’t no way of them telling what those crazy gals are thinking. You see the bogus sexist assumptions that run under this thinking? The reason the film functions is because it takes female sexuality serious, when things start going rum it’s because one character (guess which) don’t.

So yeah, Union soldier, Confederate girl’s school. He’s discovered in the woods by one of the children and the agreement is made that they’ll care for him until his wounds are sufficiently healed that turning him over to the local encampment is not necessarily a death sentence. Things are warm down there and life happens at this languid pace. Most of the students have returned to their families, the slaves have been dismissed. Coppola obviously realises that it may be a little hard for the audience to empathise with unrepentant slavers but their notable exclusion sets the white feminist alarm whirring.

So with the absence of any truly sympathetic party our attentions falls between three leads. Nicole Kidman as the owner and matron of the school, Kirsten Dunst as its lone remaining teacher and Elle Fanning as the eldest and most headstrong of the pupils. Their respect, conflict and solidarity as they try to adapt their lives for the sake of their guest. They’re amazing. All three of them, I know I chatted a lot about Farrell, and even IMDB gives him top billing, but it’s the women here who carry this joint.

The way that each of them holds themselves, moulded by this system they find themselves in, one which attempts to guide all women towards this idealised norm. They all have their ways of rebelling against it: the matron a little too stern; the teacher a little too dismissive; the student a little too uncaring. The film gets it laughs at how decorous these characters was when confronted with the corporal being comparatively outrageous, or when scandalising each other, but in a world that so harshly legislates their desire they all gotta find their own ways to get it out their system.

Philippe Le Sourd shoots these beautiful tableaux they fill the film in static majesty. We see the women at prayer, music recitals, in class, at dinner. The images very nice, but the way they linger all over the screen becomes its own sort of sinister. The perfect images becoming a literal prison for the characters, one which they strain to escape. It’s only when they’re broken off, the camera confident enough to push in for a rare close up that the guard drops and woof, you get why this cast is essential. Kidman, Dunst and Fanning can just pull off big acting so real. 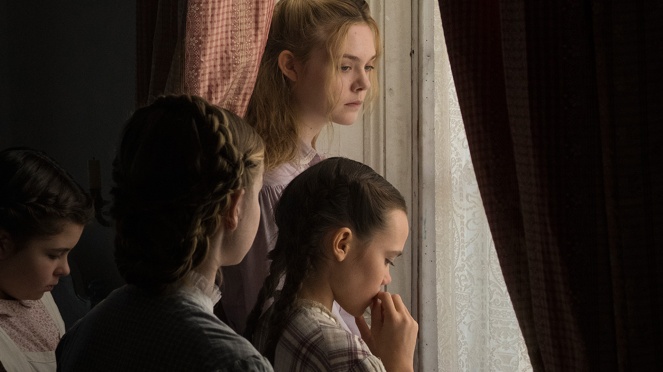 Things go to shit eventually, and I ain’t spoil the movie for you. Suffice to say that the actors work all of a sudden starts to get so much harder, they have to get so much more specific in what they going for, Coppola walking straight down this line of where the insanity of the source material be threatening to completely destabilise what she got going on. It weathers it though, and then finishes all grand and tragic.

It feels like lingering behind how composed and restrained the picture is there this anarchic rebellion. Like it’s all one big dare, one elaborate superjoke, when it all threatening to become a little too much. Struggling to take the silliness seriously, and sometime it go a bit too far and the film itself slows right down to the halting pace of these characters lives. Then at others it’s just perfect, frustrating.

The Beguiled is currently screening in UK cinemas.

One thought on “The Beguiled Review – Southern hospitality”