Berlin Syndrome is a 110 minute movie. If you’d asked me how long I’d been in the cinema right after it ended I’d have said about two and a half hours. It’s not a particularly slowly paced movie, it’s just unbearable.

Like, imagine, what if Room but without any of the interesting bits? Take out the child, take out the catharsis and relief of emerging back into the world. What if it was just a woman being kidnapped and abused (physically, sexually and emotionally) for an entire film. It’s horrifying and disturbing and it made me feel ill. If that’s what you want then perfect, sit back and feel like shit for an hour forty. I don’t have the stomach for it.

Not to say it’s entirely a me problem though, the film got a fair few of its own. Those of us who like our entertainment extreme generally like it that way because they want to imagine the courage and resilience of the person in those conditions. In the same way that extreme sports make us feel extreme, challenging art helps us comprehend what it means to be challenged; but there’s nothing new here, nothing we haven’t seen before. Maybe our society is just sick, the only thing Berlin Syndrome is bringing to the table is its hyperreal depiction.

Not enough. It’s very stylish, but in its own way, ain’t that another form of carelessness? The kidnapper’s (Max Riemelt, Germany’s Chris Evans and Sense8‘s Wolfgang) apartment is production designed very nice, he’s taken residence in an abandoned apartment block, set his flat up like a minimalist showroom. So too, is the real world architecture of old East Berlin that seems outfitted to conceal the inequity going on behind those concrete walls. All this focus on the surface, how he ties her to the bed, the big bar that goes right across his door, tears us away from the emotional truth of his captive’s situation.

Claire, Teresa Palmer (of Hacksaw Ridge and Lights Out), turns up looking like Kristen Stewart in an Olivier Assayas film, she’s a backpacker and photographer, coming to Berlin at short notice, ‘to find herself.’ She jokes. It’s a strong performance and I don’t wanna put this on her, this sorta shit ain’t easy on an actor and to her credit there’s not a point where I didn’t believe her. The script gives her nothing though. It’s so disappointing, we know better than this now.

She is provided no agency outside of her captor, I struggle to find a single moment in the flick where she is given the opportunity to express a facet of herself outside of the paradigm of her captivity. In doing so the film conflates the physical captivity with the captivity of the mind, the titular Berlin Syndrome. This construction is reliant on her victimisation, and by choosing to depict that reality the narrative lens has gotta align itself with the captor. It feel like it don’t understand it’s doing this.

Totally is though, because Andi gets a whole life of his own. He gets a father and a teaching job, whole complex internal life going on here. I suppose it’s supposed to be the key to explain all his actions but in the end it feel more like an excuse. Why it so desperate for him to be understood? Provide him with a meaning? Y’all understand that inventing one helps nobody, right? It’s worth noting here that Riemelt’s performance is also pretty good, not his fault in being so mishandled.

Possibly there might be some worth to it all if it attempted to engage with its material on a political level, there’s things that could be made here about privilege or entitlement, possibly rape culture or consent, but the very fabric of this joint is one that works to fundamentally destroy meaning. The only moral I’m getting from this one is, if you’re a young attractive woman don’t be acting confidently or assertively in public. I’m going to lay most of the blame at screenwriter Shaun Grant’s feet. Dude, you wrote something so concerned with the mechanics of this situation you forget all about the characters you’ve placed in there.

I’m trying to muddle my dislike of this into some actual words. In attempting to depict a sociopath the team here might have just made a sociopathic film. Which, boy, make for a strong, confrontational horror experience. It’s certainly been the most viscerally upsetting thing I’ve sat through this year, good job.

Now, please, do your best never to make another film like this again. 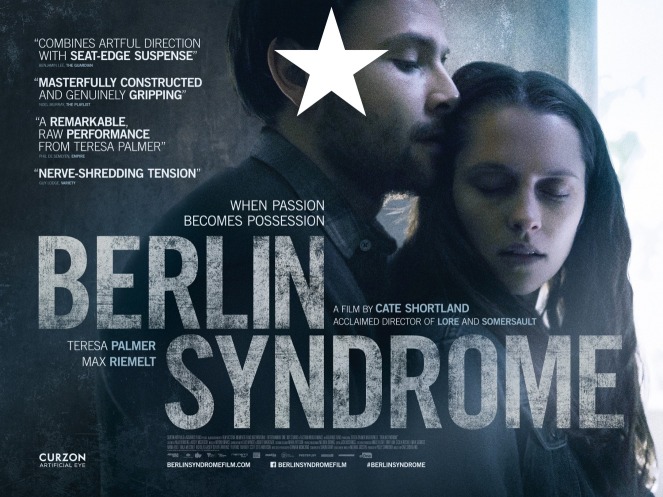 One thought on “Berlin Syndrome Review – Dank, and not in a good way”