The Great Wall: A Communist Spectacle

I am woefully underprepared to talk about Chinese film, it’s a huge whole in my knowledge i am desperately trying to fill up. Now we see the release of the most expensive, expansive Chinese film of all time and it’s hard to know what to make of it. Is it an attempt to position China as a player in the global film industry? Sure seems to be, you got Matt Damon, Pedro Rascal, Willem Dafoe to bring in the western audiences. It avoids the more specific elements of cultural fetishism that make traditional wuxia films (your Crouching Tigers, your House of Flying Daggers) appeal to western audiences, presenting instead a more de-ethnicitised fantastical interpretation of the Song dynasty.

I’m unsure how much funding exactly came from the Chinese government, cos what the film is undeniably is an, if not a specifically Chinese piece of cultural output, an extraordinary political export. A powerful example of Communist filmmaking. Like, it’s shocking and undeniable, it feels so weird to be watching this in an actual theatre. A lot had been made of filling this Chinese production with western faces, but the film is deliberately exploiting their ethnicity here, as the characters come to represent the foibles of western culture.

This is a film in which it is explicitly explained that the noble, egalitarian, disciplined squadron of warriors that our heroes fall in with are literally fighting the physical manifestation of western greed and avarice that threatens to overtake first China, then the world. It’s outrageous, and this perspective filters down through into every aspect of this joint. It’s single-minded in its pursuit of this single ideal.

So the plot goes that Matt Damon and Pedro Pascal play William Garin and Pedro Pascal, two western mercenaries and explorers, determined to reach the great fortress state of China. Their plan to obtain the secret to black powder, the explosive substance that provides the backbone of the nation’s military advantage. Arriving at The Great Wall, their party pursued by Mongol forces, they find a nation under siege by the lizardlike, alien Taotie. Their execution put on hold by an unexpected attack, their combat proficiency finds them drafted into a war beyond their comprehension.

You’d think by virtue of his heroism William might be a hero. Nah. He gets his moments, but his success is entirely motivated by his ability and willingness to integrate into the systems of life of his captors. Y’all see, The Nameless Order is this perfectly functioning machine of death and defence. There no room for individual heroism in this structure, the film deliberately disassociates us from the pieces being shuffled in these action sequences. The victory of the many is the victory that we are concerned with, our leads arrive dirty and wounded, by the time the battles come, they are clean, well pressed, and in formation.

Maybe I’m trash, but I really liked how the film’s construction of its action sequences. Due to the depersonalisation of the military machine setpieces snap around the battlefields indulging in the intricacies of the constructed fantasy. A sorta bungee regiment dives from the wall to impale attackers at the base, siege weaponry is loosed, footsoldiers tangle. Despite the uninspired look of our enemies there’s a lot of creativity poured into the mix.
The formal weight, however, is one that the script finds itself unable to quite carry. It does its best but is so tasked which shuffling though the politics that we lose our characters. They’re often propelled by competent actors, but too often take on the feel of props with which to dramatically demonstrate the filmmakers point. Jing Tian has the makings of an international star about her, great because the movie places the brunt of the heavy lifting onto her. Damon (and to be fair to him, it is by design) feels disconnected from the material he’s exploring here, as always he’s a compelling action figure, but outside those sequences he falters.

The need for a third act escalation too leads to a misstep of a climax, divorced from the rest of the film. Which, while it presents an opportunity for cinematographers Stuart Dryburgh and Zhao Xiaoding to throw all they have at the screen (seriously, it’s a beautiful sequence;) traps the characters into a situation that rids them of the opportunity to do anything interesting. Then it just grinds to a halt, like it doesn’t know how to finish.

This is hard, I know I probably like this more than it deserves; it’s probably more interesting than it is good. Despite all its flaws it kept me on board, possibly because it just an approach to blockbuster that comes at the audience with a very different set of ideals and is unashamed in as being as discursive as possible in presenting them. There’s just more than enough here to recommend it. If you just want an action joint, there’s better ones out there, even currently in cinemas. If you have any interest in the execution of (is this the first?) attempt at a communist blockbuster flick, go see it. 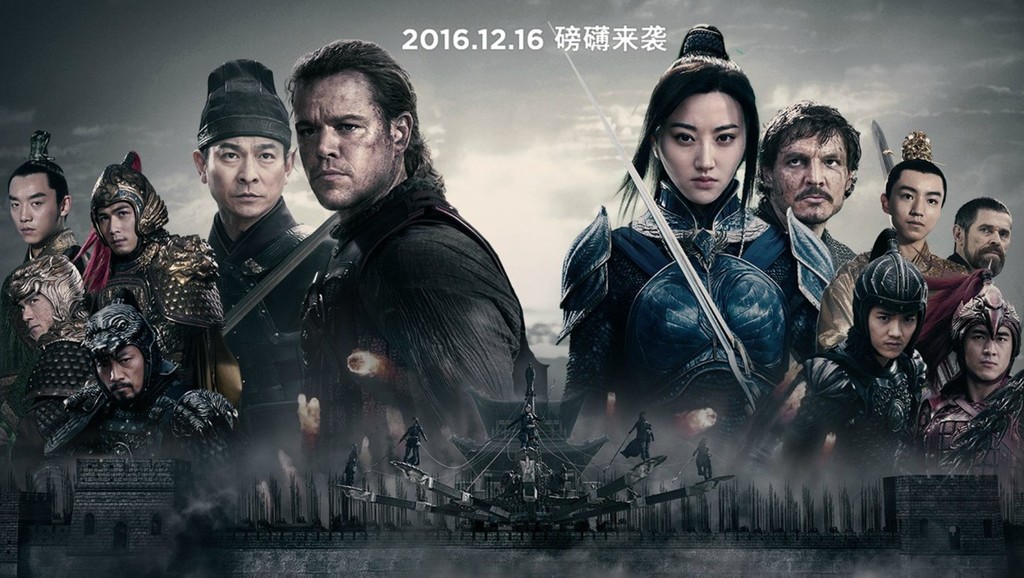 One response to “The Great Wall: A Communist Spectacle”